The Swiss Institute’s engrossing group show The St. Petersburg Paradox is premised upon an old gambling scheme where you flip a coin until it comes up heads. You bet only a few dollars, even though you could conceivably win a lot, and…

Does anyone really care about this? I don’t really give a shit. But under this pretence, the exhibition corrals artists engaged in risk and chance operations à la John Cage – though by the look of it, it’s John Cage as the star of Beetlejuice (1988), in some vaguely creepy casino scenario – ie, the gallery’s bold geometric architecture and abstract 1980s inflections make everything a bit tacky (read: awesome).

The low wall demarcating the main gallery space from the elevated platform has been painted an ugly green, with two matching ugly green chairs facing Tabor Robak’s 14-channel mass of wall-mounted monitors, A* (2014), which plays with the schlocky danger narratives of videogames. Normally in galleries you see very elegant, minimal furniture, like something Mies van der Rohe or George Nelson would fashion, but this fantastic pair of seats look like they were purchased from Rooms to Go in 1987. They perfectly complement Sarah Ortmeyer’s Sankt Petersburg Paradox (2014), which also, coincidentally, looks like Rooms to Go as scattered by Barry Le Va, with boldly geometric chessboards and tables strewn across the floor, the unkempt and tipped-over objects interspersed seemingly randomly with goose, mallard, quail and emu eggs placed unassumingly on the floor. The installation covers almost the whole gallery, such that the two very relevant, early avant-garde nods, Marcel Duchamp’s Monte Carlo Bond (1938) and Jean (Hans) Arp’s Collage Géométrique (1916), get lost in the fray. This is a shame, as it’s so rare to see a nonreadymade, nonsculptural Duchamp. But here it is, swallowed in a sea of green: two fake bonds emblazoned with the artist’s face covered in shaving cream, meant, in Duchamp’s words, ‘to break the Monte Carlo bank’.

Walk up the platform and John Miller’s Labyrinth I (1999) proffers a closeup shot of The Price Is Right. That US television show’s manically coloured set piece is a perfect match for Cayetano Ferrer’s Remnant Recomposition (2014), which looks as if all the tacky carpets from sad, rundown casinos everywhere magically found their way to SoHo and were assembled by a team of colourblind assistants. Spots, stripes and fluorescent colours mash up garishly, not so unlike the stack of chaotic prints spread on top of Kaspar Müller’s table, Tropic of Cancer (2014), which juxtaposes the cover of Chris Kraus’s Aliens & Anorexia (2000) with images of little ceramic pumpkins and stackable garden chairs that can be purchased by phone – a cacophony of items for sale, mostly shit.

All of this may sound denigrating to the work at hand, though it’s not. Rarely do artists so critical of commodification handle it with such tongue-in-cheek, kitschy pizzazz. Personally, I’d like to turn  Ferrer’s carpet into swimming briefs, and that’s saying something. 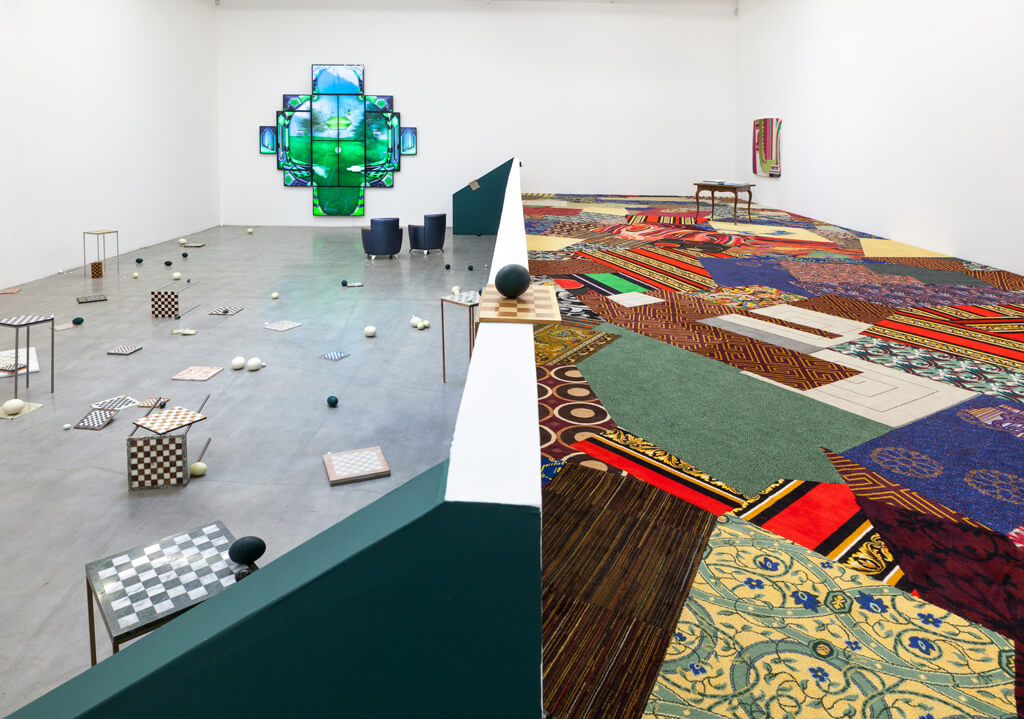