Studio for Propositional Cinema: & faintly heard (as it sinks, slowly): with The Tenderness of Maggots | Mousse 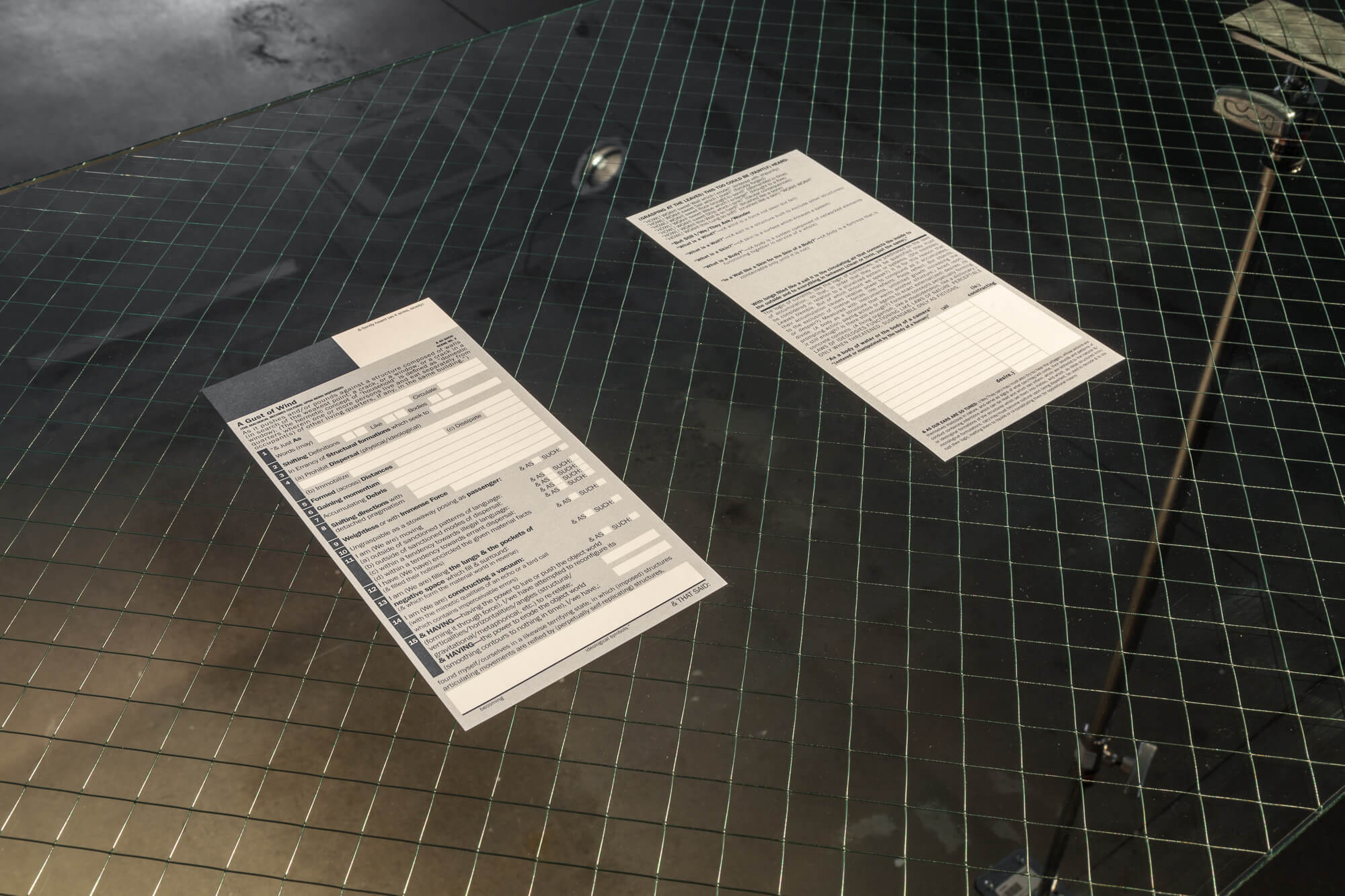 With word applied to wall and window, spoken aloud, engraved in steel, and formatted to mimic federal documents, & faintly heard (as it sinks, slowly): with The Tenderness of Maggots is an aggregate of texts. Presented by a supposed Studio for Propositional Cinema, the texts are described in accompanying materials as theater, and are informed as such through a refined integration of staging within the space’s existing architecture. Panes of reinforced glass, of the same type used in the gallery’s back canopy, are slipped into the grooves of subtracted grouting in a row of brick columns to form tables, while theater lamps are wired into the lighting grid, which lacks the usual fluorescent bulbs. These maneuvers give the exhibition nimbleness, emphasizing the temporary situation hosted by a structure.

Every spectator who enters the gallery, traverses the space, and reads the scene descriptions and printed soliloquies of A BAND of RATS, A GUST of WIND, A COPPER-GLEANER, and A PANE of GLASS, is said to enact the play titled & faintly heard (as it sinks, slowly):. Resting upon the elevated panes, the soliloquies are poetic pronouncements of existence and expansion within precluded circumstances of power that have been printed in the graphic format of US immigration customs declaration forms, a carrier of linguistic governance for the nation-state at its physical borders. In the text, and elsewhere in the studio’s mostly written oeuvre, is a fixation on structures, cracks, passages, and hollow spaces for parasites, rats, or the more general “we.” The “we” of emphasis is both the trans-temporal collective of discursive cultural agents, and the receiver who completes the enunciative act. Discourse is formed by enunciation between speaker and listener, while “enunciation in itself implies collective assemblages,” a “constellation of voices” that is in formation. (1)

In their grammatical format, the scene descriptions in vinyl throughout the exhibition evoke, in the sense of a referential voice, Lawrence Weiner’s “Statements.” Phrasing in the past participle allows the studio to inherit the generality of language and space, describing a room not dissimilar to that of the exhibition, yet distinct, with particular states of open windows or gases within it. Rather, what is described is a possible scene for a possible production, which in the words of Weiner “need not be (produced).” Such illocution differs from the exhibition’s press release, in which the propositional content of the utterance, made by an art institution, has been made real, in that the exhibition has come to fruition as described. In prior statements by the studio, viewership is said to haunt the lived realities of daily life, and such is the way of extending the cinema to this exhibition. At once outmoded and eternal, the cinema is everywhere and all of us are actors, exchanging projection for a lens-less speculative frame.

In The Tenderness of Maggots, a professional actor arrives weekly to perform a monological adaptation of Comte de Lautréamont’s Les Chants de Maldoror (1869). Of noted significance to the Surrealists, the nonlinear novel speaks from absolute evil, transgressing well beyond conventional decency. In the Saturday-afternoon performances of the text, pleasures found in the devastation of others are read aloud amid the teetering of glass on concrete. As much affect as absence, the studio indulges in evasive deferral. Putting on the production of another author divorces only slightly from prior substantiations—as the studio does not exist until being called into the substance of exhibition—in which it dispersed its voice across a field of peers, calling on fellow artists to read manifestos, screen video, and exhibit work in the studio’s place.

Occupying the exhibition, which is truly time, and “time being the material of all discourse,” (2) as the studio has previously stated, allows for the fragmented enunciation of the discursive formation to fall upon the many viewer-producers of the work, making common the opacity that accompanies both the anonymous group and speaker of a prewritten text upon the stage or in the frame. Such forms of verbal exchange are said to be comparatively “close,” rather than the “distance” of written sciences seeking objective claims. (3) Put another way, the proximity of the acted discourse is a fiction always, as it is written by another and performed as representation. To quote further from text in the exhibition, “Every fiction is a metaphor for the ideology with and upon which it is constructed.” So too is the studio, though it is a fiction constructed by discourse itself.