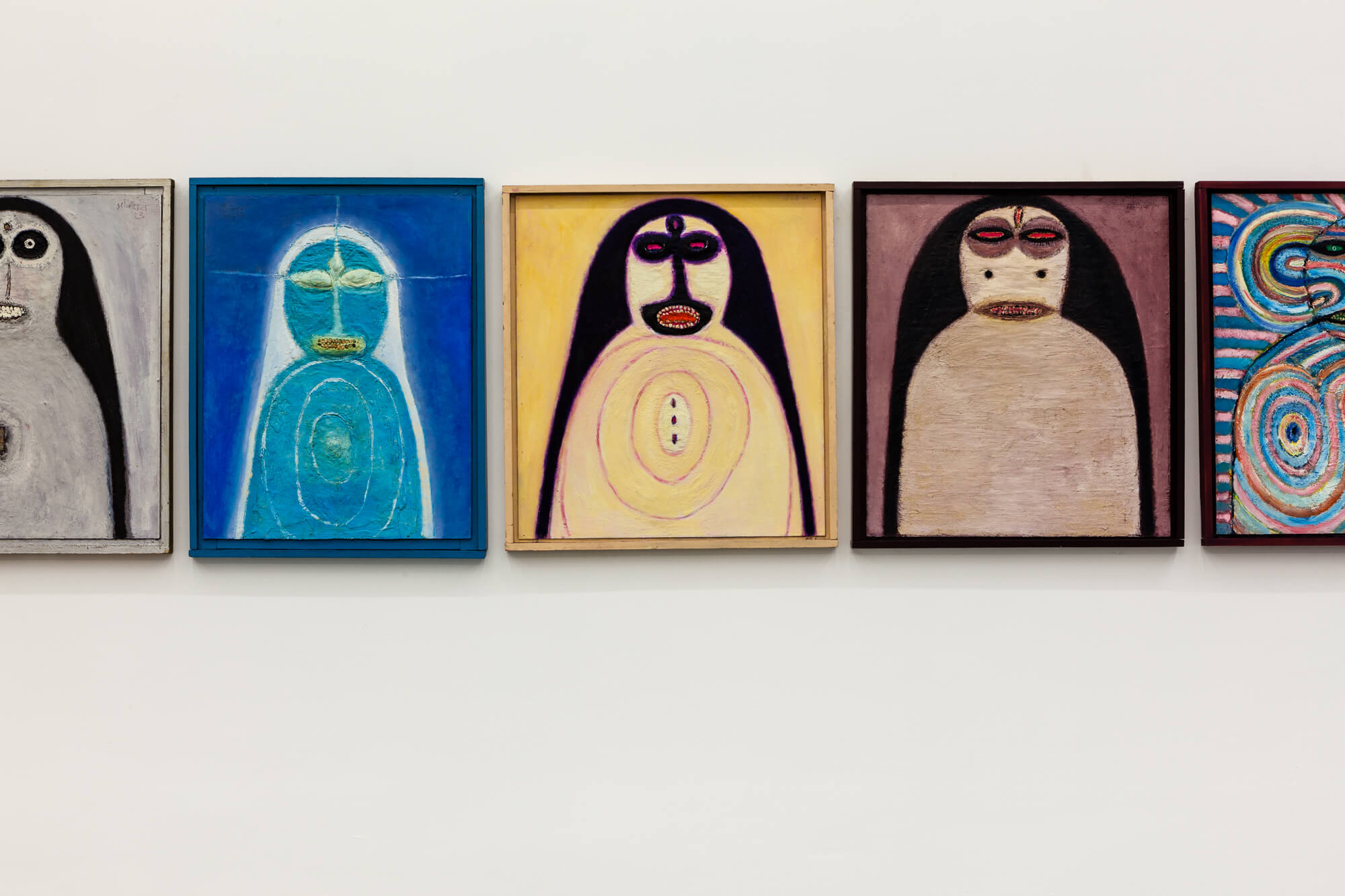 For over two decades, the Swiss artist Hans Schärer focused on painting the female figure, transforming conventional depictions of women into highly unexpected forms. Beginning in the early 1960s, he danced between creating a series of over 100 vibrant Madonnas — each with slim resemblance to the religious Mary — and one of over 150 highly eroticized, fantastical scenes that edge the female nude towards the realm of pornography. These two groups literally come face-to-face in Hans Schärer: Madonnas and Erotic Watercolors at the Swiss Institute, the first solo exhibition of Schärer’s work in the United States and a condensed version of a show the Aargauer Kunsthaus hosted last May. Hailed in his country as one of the most profound artists of his generation, Schärer — who also painted landscapes and still lifes — is often characterized as an outsider artist or as part of the Art Brut movement due to his often-crude aesthetic, but he was actually very involved in the art scene of his day.

The airy, one-room gallery houses his striking work well, not only allowing one to step back and broadly observe Schärer’s oeuvre but also placing the contrasting series in dialogue with one another. Madonnas line the walls of the lower floor and are hung to loom above viewers as if they were icons in churches; the erotic watercolors occupy the upper section, creating a wholly different mood of levity. The paintings themselves, which number over 80, are all bewitching even as they stand as variations on the same two motifs. Whether Schärer intended to establish an explicit relationship between the two bodies of work isn’t clear, but his long and concurrent devotion to the themes was tantamount to an obsession with the image of the feminine.

“There’s clearly some sort of question he was trying to solve with both of these, as he was making them back and forth from one another,” curator Alison Coplan told Hyperallergic. “It’s this thing concerning devotion; of sex and eros and faith, and it’s interesting to see how he was working with these themes through his whole life. Although he made these works over 20 years, you don’t see a development. It’s more consistently unique; it’s this chronology without development.”

Schärer’s Madonnas were inspired by a Byzantine mosaic that he saw in the Cathedral of Maria Assunta in Venice, though the resulting oil paintings far from resemble the motherly woman. Androgynous and unaccompanied by a baby Jesus, each frontal-facing figure stands as an abstract, alien-like creature with just a head atop an ovoid body. Some have eyes that stare ahead; others seem visionless. Many bare their teeth — pebbles or other shards of debris Schärer found in his backyard and embedded in the dense layers of paint — lending the figures aggressive expressions. Dark shapes like veils surround many, but these shrouds are the sole reminders of classic Christian iconography. Allusions to non-Western cultures pop up, from patterned African masks to abdomen cowrie shells like those on Kongo figures to bandaged bodies that recall Egypt’s mummified dead. The sacred image Schärer painted dissolves into ambiguity, at times to the point of extreme abstraction: in one work from 1966, subtitled “Vernagelte Madonna,” Schärer simply offers a grate within a red, wooden frame. Humorous — or at least bizarre enough to warrant the lift of a brow — his Madonnas are powerful for their decidedly cryptic appearance. Part of the intensity also stems from their texture: looking at the thickly and roughly applied paint, one has a sense of Schärer’s force against his canvas, of him repeatedly trailing the brush as if he were scraping away a surface.

The mask-like heads of Schärer’s Madonnas appear in the background of some of his erotic watercolors, but aside from such chance overlaps, the series are largely distinct. The thinned medium alone lends the paintings a luminosity that makes the startling subjects feel lighthearted. In these, naked and voluptuous women — seemingly iterations of the same model — smile widely and frolic in theatric or carnivalesque settings. Women embrace phallic structures and receive pleasure from creepy, grinning animals; bizarre contraptions; and, eventually, men, with the episodes increasing in explicitness over time. Rather than a slice of a continuous narrative, each painting is a vignette, one with as much mystery as the Madonnas’ identities hold. The images seem like they should be demeaning, but the women are commanding, asserting charge in each situation. Schärer portrays them larger than the men, who often appear as clowns or balding, comical figures with phallic noses. Dream-like, blatantly absurd, and thoroughly exhilarating, his watercolors don’t only celebrate sex but do so from the female perspective; they suggest that no woman’s fantasies are off-limits.

If you stand along the gallery’s edge to survey these watercolors together with the Madonnas, the disparity between the two in subject and style is evident, but color jumps out as the immediate overlap. Schärer painted with a vibrant, often joyous palette; even his works with darker tones seem to dazzle with hints of brilliant hues. The meaning of his Madonnas and nudes may be muddled, but from the physicality of his paint as well as the spirit of his painting emerges a palpable energy that only seduces the eye.