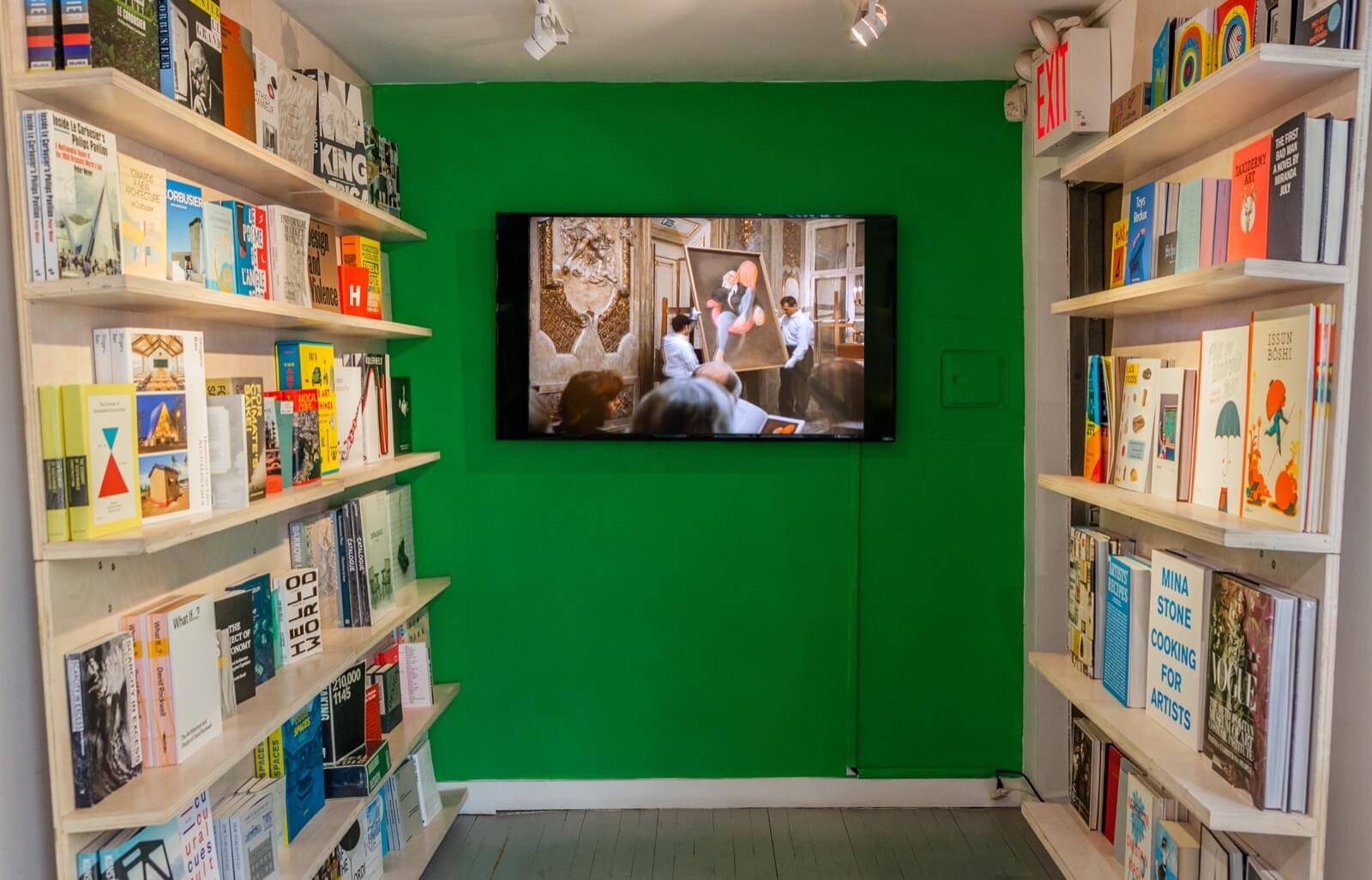 Working at a painting conservation studio, I encountered a strange motif of jealousy and rage. The conservator recounted a trope in stabbed paintings, wherein spurned lovers and wrathful kin took their rage to the art collection, thrusting knives into Keith Harings, Lucian Freuds, Mark Rothkos, and other auction house darlings. The artworks stood in for the body of the collector; these were instances not of murder, but of damaged property. What, after all, can a cracked and peeling painting fetch on the market? It might as well be covered in blood. These tales beg the question of what art signifies beyond its own objecthood and what it has the potential to represent.

FADE IN: INT. ART GALLERY – DAY at the Swiss Institute considers these themes, focusing on the role that art plays in narrative film and television. The exhibition space recreated and commissioned works by twenty-five artists that delve into the ontology of the art object within the realm of cinema. The show compellingly demonstrates that art on screen is not merely a prop, but often a plot-driver, marker of political authority, or indicator of a historical ethos. These mysteries, comedies, and science fiction stories free art from the walls and vitrines of the gallery and museum and place it under a different spotlight, where it has the potential to assume another purpose or persona. Displaced within the realm of the cinematic, art shifts, shakes, and bares its own precarity.

Artists re-edit film footage from popular and mainstream movies, whizzing through narrative arcs to linger on pregnant moments where visual art appears. Amie Siegel’s video Another 9 1/2 Weeks (2016), presents a cogent clip of the auction house scene in the sequel to 9 1/2 Weeks (1986), Another 9 1/2 Weeks(1997), that acts as a synecdochical stand-in for the erotic power-play between a Wall Street trader and a blue-chip gallerist. Amid white-gloved pomp and gilded frames, a coterie of moneyed art lovers perform a choreography of head-nod bidding and craned-neck gaping. The trader in the back outbids the crowd for the whole lot, his possession of the objects he desires mirroring his domination of his lover in the film. The power move makes him the star of the auction, displacing the Surrealist canvases that ought to be its focal point. Siegel’s gesture here shows the art-sale transaction as more than merely theatrical—it becomes an absurdist tableau of attention and power.

In contrast, Christian Marclay collages film clips that reduce art to trash in his video Made To Be Destroyed (2016). As works are smashed, shattered, crumpled, and smeared, Marclay foregrounds the essential emptiness at the heart of the rarefied aura surrounding visual art. What becomes of a Rembrandt self-portrait when the Joker from Batman (1989) smothers his dripping red handprints over it? The Joker’s grimy gesture directly rejects the canon of art history, the decorum demanded in the museum space, and the veneration of the artist as creator. While the deliberate destruction of canonical works recalls modernist satires like Marcel Duchamp’s mustachioed Mona Lisa (L.H.O.O.Q. (1919)), the Joker’s gesture more closely resembles malicious graffiti. This slathering scene, however, deliberately aligns visual art with an elitism that can be countered with more democratizing media—like the blockbuster Batman itself. Other destruction clips document faux pas, like a clumsily dropped statue. For Marclay, art—as both concept and physical object—is fragile.

Art performs a specific function in pornography, the ultimate medium of mass consumption. Between thrusting and splayed bodies, the hardcore pornography clips in Scott Stark’s video Noema (1999) present glimpses of landscape paintings, decorative vases, and other banal artworks. The videos inadvertently archive the kitsch of the home as they titillate and seduce. In Stark’s quick edits, the camera pans toward the artworks as actors complete sexual acts or flip over to switch positions. If the art functions as a resting place for the viewer’s eyes between scenes, it also, and more simply, presents realistic backgrounds that emulate the decorations of a typical home. If porn is about watching bodies, Stark argues that this art is not made to be looked at, but rather to fill space. Art assumes a functional role, underscoring and enhancing the aesthetics of pornography.

Beyond edited clips, other artists reinterpret the physical artworks of film. Dora Budor reimagines the crude sculptural gynecological tools devised for experimenting on “mutant women” in the psychological thriller Dead Ringers(1988), a story about identical twin gynecologists who seduce patients. Her eerie sculpture, A woman passing on the street said, ‘a decongestant, an antihistamine, a cough suppressant, a pain reliever.’ (2016), separates these tools from the display table in the movie by inserting them into a dense fossil form in a glass vitrine. Trapped in a mixture of epoxy resin, rocks, soil, sand, and other materials, Budor envisions a new past and future for these sculptural forms that precedes their disturbing, violent movie history.

More precise prop replicas, or the very movie props themselves, also appear in the gallery. Michael Bell-Smith presents Covers (2016), a compilation of fake magazine covers produced by Earl Hayes Press for the movie industry. Titles like Modern Maternity, Teenage World, News Profile, and Sports Limited read like fake knockoffs of real magazines available for sale at the local bodega. Designed to appear real, these simulacrum resist their role as art objects. They even reproduce the gender archetypes and stereotypes of mainstream media magazines. Yet these simulated magazines are still merely covers that will grace a coffee table on a sitcom. There is no content on the pages. Presented as a series on the wall, Bell-Smith points to the overused stock photographs, image compositing failures, and other glitches that distinguish these replicas from the real.

FADE IN: INT. ART GALLERY – DAY coaxes art out of its frame, allowing it to peer back on itself from a novel distance. This perspective manifests as a funhouse mirror, dispensing information both jarring and introspective. Visual art is increasingly self-referential, a victim of hermetic communities and structures. This exhibition allows art to recognize what it may signify beyond its own objecthood and placement in the gallery, museum, auction house, and collection.