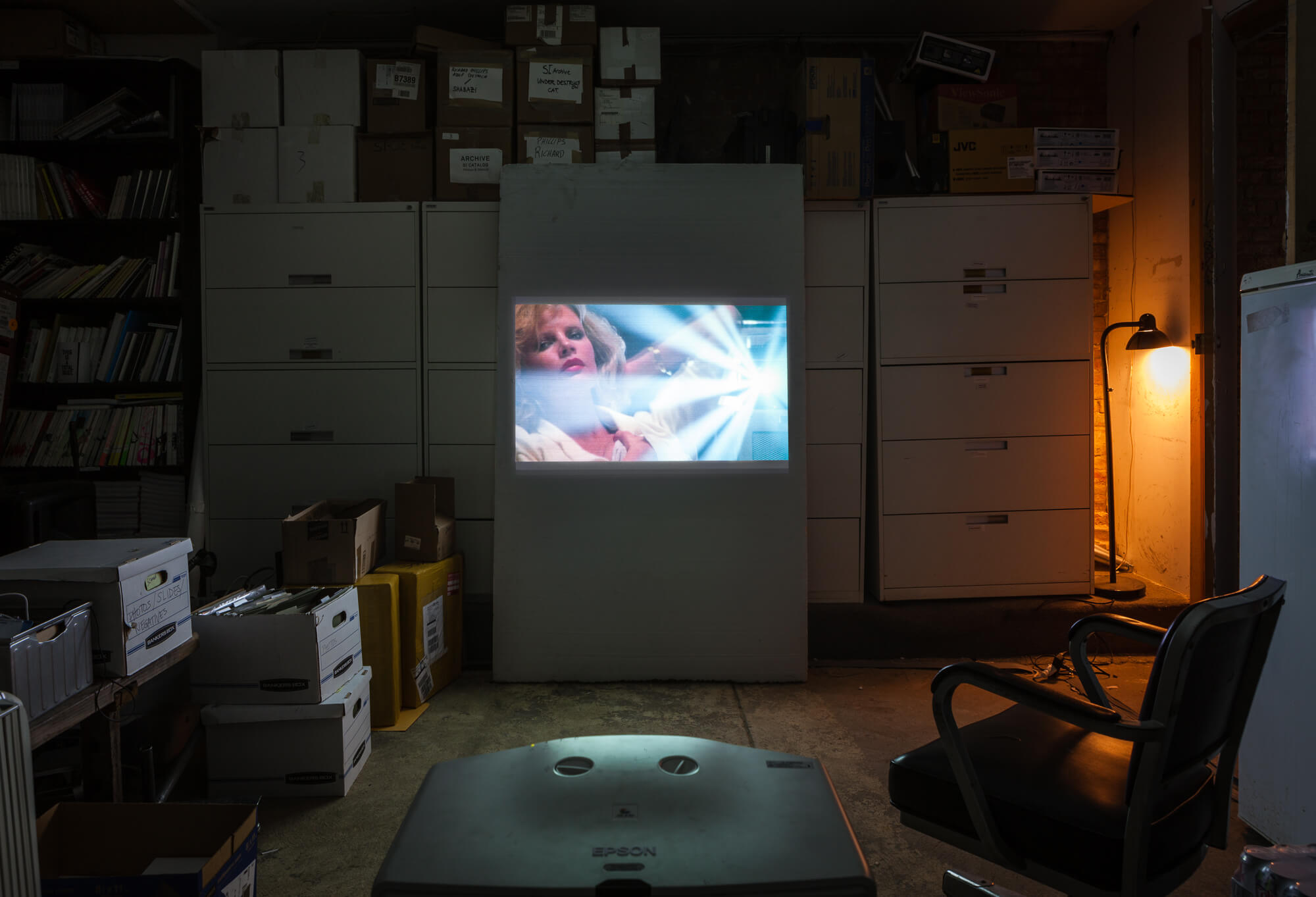 A film or television series frame is full of all manner of space, objects, light and shadows, special effects, actors and props: Mis-en-scène, in the language of cinema. Every detail that builds the artificial reality of filmic storytelling. This stuff goes largely unnoticed by audiences—unless the spectacle is the point—because that is what is meant to happen when it has been done well.

In the Swiss Institute’s latest exhibition, FADE IN: INT. ART GALLERY – DAY, 25 artists have sourced, reproduced and created artworks in response to a history of art seen across classic movies, science fiction, pornography, musicals, and soap operas. All of the works are inspired by artworks that appear on-screen in the form of props, set design, plot devices, or character cues.

“The depiction of art in film and television, not to mention the relationship between all of these mediums, is a topic that comes up continually with artists, but it is a relatively underexamined subject in exhibitions (though there has been some very interesting work on this in film studies and other academic fields),” the Swiss Institute tells The Creators Project. “Art in mass media is part of a constellation of ideas and cliches about what an artist is, what an artist does, and what the artist’s role in society is.”

The show’s curators believe TV and film can guide individuals towards art just as easily as they can suggest that artists are a criminal and amoral underclass. Every artist they talked to had favorite examples that had remained with them for years.

“We loved collecting examples of this everywhere, from haunted portraits of film noir, to Clive Owen shoot-em-ups in the Guggenheim (in The International, 2009),” the Swiss Institute says. “Part of the thrill and comedy of setting a destructive scene in the Guggenheim, where weak shadowy video installations stand in for a kind of ivory tower of contemporary culture, comes from a deep-seated fantasy to blow this all up. Popular culture is a place where these sorts of anxieties and desires are explored.”

Artist Dora Budor, for instance, created a sculptural installation based on a series of “speculative instruments for performing gynecological experiments on mutant women,” featured in David Cronenberg’s film Dead Ringers (1988). Not only do the objects appear in the film as medical instruments, they function as artifacts or “art objects” in a museum. Working with these ideas, Budor creates a sculpture of fossilized remains of these objects that pre-exist the events of Cronenberg’s narrative as relics of an “imagined past.” Budor presents them as though they might be ancient artifacts in a museum of natural history.

Mel Chin and GALA Committee’s In the Name of the Place is also featured in the exhibition. GALA committee, formed at the University of Georgia and California Institute of the Arts (“GA” for Georgia and “LA” for Los Angeles), created props and made slight script revisions as “product placements” for Melrose Place. These covert art insertions weren’t made in service to commercial interest.

“The southern California television studios have dramatically shaped the face of global cultural consumption and attitude through the embedded promotion of U.S. goods and lifestyles,” the art collective said back in 1997. “The GALA Committee sought to work with commercial television by actively approaching it as a proper site in which to develop possibilities for education, to generate the transfer of information, and to layer narratives and poetic constructions. In the Name of the Place can be considered a blueprint for the development of the geography of culture on multiple levels.”

In La Collectioneuse, artist Carissa Rodriguez creates several versions of a sculpture from Eric Rohmer’s film 1967 film of the same name. In it, a young and free-spirited woman disrupts the vacation of an artist and his dealer.

“The sculpture in question—a paint tin with razor blades attached to it—is gestured to in a conversation with the artist and dealer, as they discuss the violent nature of the artist and his presence in society,” the Swiss Institute says. Rodriguez created four replicas of this sculpture for her show, also called La Collectioneuse.

These are only a few of the dozens of works at FADE IN: INT. ART GALLERY – DAY. The exhibition runs until May 19th at the Swiss Institute. Click here for more info.