For the gallery at the Swiss Institute, Jacob Kirkegaard has produced a new work named after the Swiss Institute’s location on Broadway in Manhattan. The piece ’Broadway’ is a five-channel sound installation that comprises the columns that run through the gallery space. Although elements of the building’s architecture, the columns also transmit subtle vibrations generated by movement on the street below. The internal sound of each column has been recorded with accelerometers and is played back into the columns by means of sixty small exciters. Thus the five columns are transformed into loudspeakers, each of which plays the sounds of Broadway in its individual resonant frequency.

Jacob Kirkegaard has received international attention for his artistic ventures into hidden acoustic spheres. Using accelerometers and other scientific equipment, he explores those resonant spaces that usually remain inaccessible to sense perception.

With the generous support of The Danish Arts Council. 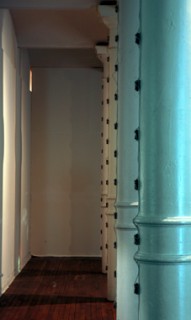