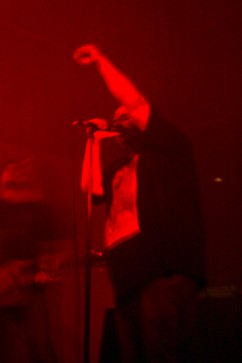 DÄLEK undermines the slick gloss of mainstream hip hop with gritty, complex underground hip hop that assaults the listener with aggressive, intelligent rhymes, electronic ambience and otherworldly clicks and whirs. Dälek has collaborated and toured with such musicians as The Melvins, Kool Keith, Faust, Grandmaster Flash and many others.

NORBERT MÖSLANG works both as a musician and as an artist. A pioneer in the field of electronic noise music, for over 25 years he has worked to make music using an armory of broken-down appliances, self-built and adapted instruments, and hacked computer software. He has collaborated with musicians such as Jim O’Rourke, Kevin Drumm, Hrvatski, I-Sound and many others and his visual work has been exhibited at numerous international venues, including the 49th Venice Biennial.

TOMAS KORBER is a Swiss-Spanish composer/improviser, based in Zurich. Korber has written compositions and played improvised music since the early 1990s. He has performed as a solo musician and in collaboration with Günter Müller, Norbert Möslang, Otomo Yoshihide, ErikM and others. He also composes music for theater and film productions and has performed extensively across Europe, Japan and North America.

With the kind support of Pro Helvetia