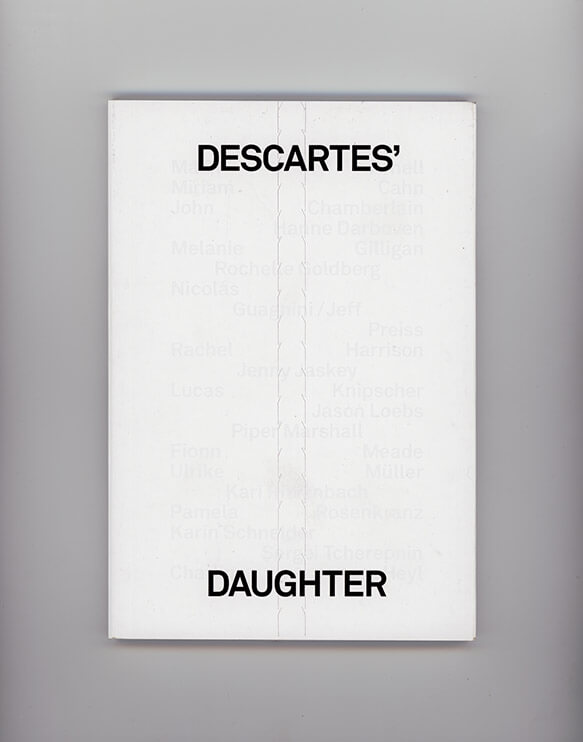 Taking the death of renowned philosopher, mathematician, and writer, René Descartes’ five year old daughter Francince and his creation of an animatronic effigy of her as its ‘springboard’, the exhibition explored the traditionally perceived divide between conceptual and expressive works, those dealing with either the body or the mind. The reader includes five essays which explore and agitate the divide, if there is one at all, within the artists works present and beyond.

Developed from a text initially written for the exhibition of Descartes’ Daughter, Transitional Line has a hybrid form. It fuses criticism with an autobiographical touch. The undertone is a phantasmatic dialogue with Structuration of the Self, the last body of work by Lygia Clark. The text produces visual forms sparkling its content. It is an experiment at forming phantom-signs.

Abraham Adams is a poet. He is an editor at Ugly Duckling Presse and was formerly associate editor of Zone Books. His collaboration with Karin Schneider, “Homage to Michael Asher: Installation for a Photograph,” is currently being exhibited at Galerie Barbara Weiss in Berlin. He has an essay on the New Yorker‘s poetry section in progress with Triple Canopy.

Clément Delépine is Assistant Curator at the Swiss Institute, New York. He is organizing the monographic exhibition of Niele Toroni at Swiss Institute in 2015. He writes for such publications as Sang Bleu, Novembre, and most recently Bomb Magazine.

Melanie Gilligan is an artist and writer based in London. Gilligan is best known for her performance works that examine relationships between politics, aesthetics, and their political economy. Critical writing is part of Gilligan’s practice and she has contributed to art magazines and journals such as Texte zur Kunst and Artforum.

Jenny Jaskey is Director and Curator of The Artist’s Institute at Hunter College, New York, where she is currently planning an upcoming season with Carolee Schneemann. Her work over the past three years has focused on developing sustained conversations, exhibitions, and elaborations on the work of individual artists. She is a contributor to art journals including Texte zur Kunst,Metropolis M, Modern Painters, and Mousse.

Karin Schneider is an artist/writer. Co-founder of Union Gaucha Productions (UGP), an artist-run, experimental film company designed to collaborate with people from different artistic disciplines (1997 to 2010). Schneider was also a founding member of Orchard gallery, a cooperatively organized exhibition and event space in New York’s Lower East Side (2005 to 2008). In 2010, co-founded Cage to facilitate other kinds of social interactions.

Piper Marshall is an independent curator and writer based in New York City, as well as a doctoral candidate in the Department of Art History and Archaeology at Columbia University. She organized the group exhibitions “Descartes’ Daughter,” “Standard Operating Procedures,” and “Middle Man.” Marshall writes for Texte Zur Kunst, Kaleidoscope Magazine, Spike Magazine, The Third Rail and artforum.com. In 2015, Marshall will curate six exhibitions for Mary Boone Gallery, New York.

Charline von Heyl is best known for abstract paintings. Von Heyl’s potent canvases and collage-based works on paper incorporate diverse materials and techniques to conduct an unflinching exploration of painterly abstraction. Her practice eschews a signature style in pursuit of a unique pictorial tension for each work.