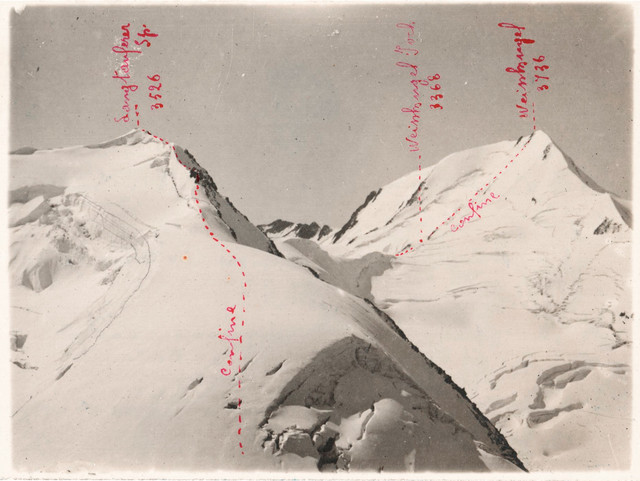 Please join us for the US launch of A Moving Boarder: Alpine Cartographies of Climate Change. In 2009, Italy and Switzerland signed an agreement that introduced into law the notion of a “moving border.” Since the 1990s, surveyors of both countries had noticed that the melting of Alpine glaciers—where much of the border lies—was causing the lines on the ground to drift away from their representation on official maps. Born out of practical necessity, this little-known agreement is possibly the first instance of two sovereign states recognizing the instability of their national territory in the face of global warming.

Two of the book authors, Andrea Bagnato and Marco Ferrari, will be joined in conversation by Heather Davis and Shannon Mattern. They will discuss the ambiguous nature of borders—zones of othering, markers of sovereignty, malleable cartographic inscriptions, shifting geophysical terrains—in the current condition of climate crisis and mass migration.

The event will be introduced by Isabelle Kirkham-Lewitt, Assistant Director of Columbia Books on Architecture and the City.

Heather Davis is an assistant professor of culture and media at Eugene Lang College, The New School. Her current book project traces the ethology of plastic and its links to petrocapitalism. She is the co-editor of Art in the Anthropocene: Encounters Among Aesthetics, Politics, Environments and Epistemologies (Open Humanities Press, 2015) and editor of Desire Change: Contemporary Feminist Art in Canada (MAWA and McGill-Queen’s UP, 2017).

Marco Ferrari is an architect and co-director of Studio Folder, a design and research agency based in Milan. His research centers on the relationship between the politics of visual representation and territory. He has taught at ISIA Urbino, IUAV in Venice, and Columbia GSAPP. He currently teaches at the Royal College of Art.

Shannon Mattern is a professor of anthropology at The New School for Social Research. Her writing and teaching focus on archives, libraries, and other media spaces; media infrastructures; spatial epistemologies; and mediated sensation and exhibition. She is the author of The New Downtown Library: Designing with Communities*, Deep Mapping the Media City, and Code and Clay, Data and Dirt: Five Thousand Years of Urban Media, all published by University of Minnesota Press.