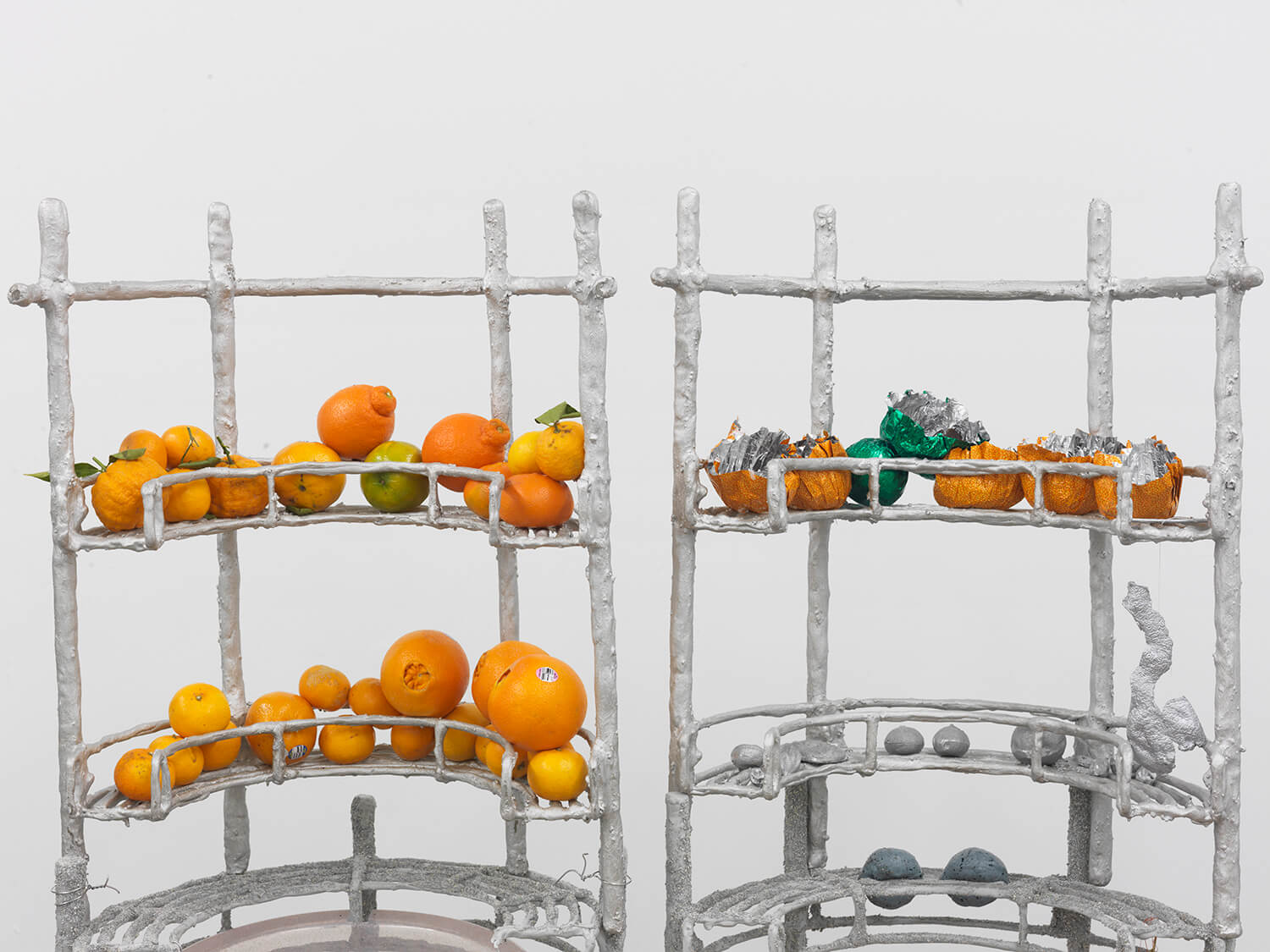 At the bodega, there is some cat litter on the floor; it’s in the edges of the doormat, dusts the bottom of some shelves. It’s really bright inside, but it’s also pretty dim. They have a few versions of each product, way more of one kind of thing than you would ever need, however not enough options for the one you wanted. You begin texting a photo to your friend, explaining, “they only have orange flavored chocolate, not raspberry, do you want something else?” or, “ummmm… weirdly v. many floss options…. preference?”

Witnessing an object undergo an identity crisis as it’s divorced from its original function and given new life as a sculpture with an ambiguous relationship to its past life is a scene familiar to most contemporary art viewers. “Parent and Parroting,” Nancy Lupo’s room-sized sculpture at the Swiss Institute, cunningly transforms this tense scene into a dryly humorous three-act play. Lupo casts herself as the director, carefully empowering the tension between awkward seating arrangements and oversized under the sink organizers. Through metonym, false mirroring, and repetition a friction-filled narrative emerges, telling of the anxiety of seasonal cycles, both naturally occurring and market-driven.

“Parent and Parroting” represents a situation somewhere between nuisance and crisis. Like clenched teeth, 28 white folding chairs are crowded along the back wall, inviting the viewer to sit. In the center of the room, the drama unfolds inside a rickety semi-circle formed by the stars of the exhibition, three structures coated in a lumpy silvery material reminiscent of an urban rooftop or sidewalk repairs. The structures are built from shelving units designed specifically for the empty space below a bathroom pedestal sink. Flipped, stacked, and secured with twist ties, these racks, like most materials in “Parent and Parroting,” are at once lost in their new context, and immediately recognizable, hovering between their present roles and what they know themselves to be.

Within the middle of the three structures, or, the second act of the play, feelings of synesthesia are exacerbated with the introduction of fresh citrus and chocolate, maintained by the institution so as to be acceptable for consumption upon visiting. The chew toys remain, like columns, this time, placed adjacent to chewed gum and stress balls, making one painfully aware that gum, is in fact, both a chew toy and a stress ball. Shards of citrus peels litter the floor, mixed in with cinnamon sticks and other detritus organic to the piece itself, creating a grungy version of the potpourri characteristic of the atmospheric décor of the “holiday season,” and the top of the toilet bowl in cute bathrooms. Standing about hip height, these mouths chirp out the contradictions we constantly suspend in order to “effectively” function. In this act, both literally and figuratively, the mouth is given things that are edible, but no less anthropomorphic and eerie. Two cantaloupes hang like large breasts in a Swiss melon carrier, a product that is simultaneously particular, obscure and homely. While the brain arranges this Venn diagram of character, the tongue clicks cordially toward the name of the exhibiting institution. Once the cantaloupes reach a certain state of decay, they will be replaced by fresh, green watermelons, as though an actress updating her body for an ongoing role, or a market tossing aging produce and displaying what is in season. Lupo’s candor in selection and treatment of materials leaves room for both the metaphoric and the pragmatic, highlighting that what it often most stressful in life is reasonably negotiating a place for one’s mind, moment to moment, transaction to transaction, somewhere on a spectrum of meaning.

Citrus season has drawn to a close, the third act begins and the color palate is toned down to the low hum of the odds and ends of a bathroom isle. Toilet paper printed with small florals, like a charming wallpaper, hangs over an edge, both out of place and innocuous. More than a dozen varieties of mint dental floss form a woven shelf across this structure, recalling the handicrafts of an anxious kid, locked in the bathroom, exploring what’s under the sink, undoing the authority of use the product tries to maintain. There is humor to this weaving as the dangling floss cases pantomime the iconic image of a bootleg dealer opening a trench coat, flaunting the range of his goods, deadpan and coy. A plastic GREENWARE cup holds wheat pennies, currency that skipped systems of accountability, and oddly finds itself still circulating, but also shares nomenclature with Swheat Scoop, one of the brands of cat litter covering the structure. Lupos uses FreshStep and Swheat Scoop; the former being known for its chemical fragrance, the latter, biodegradable, made of wheat, with a website boasting a simple company story. Snaking through the legs of this shelf-mouth structure is a flesh colored extension cord, plugged into nothing, pushed through spiky cable ties and orange stress balls donning frantic cartooned visages, like an effigy for a bad day.

It’s a natural impulse to want to play with your products, to tweak them or twist them into things you can hide inside of and behind. Through banal actions, like taking food from a dirty shelf, or sitting in a crowded cluster of folding chairs, the script of the sculpture is seemingly transgressed, as the viewer can now casually make use of the piece. In “Parent and Parroting,” small gestures of bodily upkeep, just so as to be presentable for whatever one’s next interaction may be, become a setting for word play, rather than simply a topic. Voiceovers and jingles call out from the cast of objects, which run a spectrum of hand made to mildly altered. The variety of brands and materials reverberates a browse that is uncannily in tune with both the cluttered chaos of a small deli and a device-based search for an item; oranges are present, as are clementines, tangerines, chocolate packaged to look like an orange, cast aluminum orange sticks, and stress balls that look like oranges.

The latent inference of brand names in Lupo’s work brings one back to language, and the ways we name things to distinguish them, through the senses. As one smells the fresh fruit, potpourri, cat litter, dental floss, scented trash bags, and so on, it is understood that it is the smell of a product. The mind can name one or another and can choose to follow its lead, or tune it out. Maybe the smell of the citrus makes you a little warmer in the winter as you walk into a store, perhaps next you recognize the smell of cat litter as a mask, and recalibrate the agency you give your nose. Lupo recruits these events that buzz below the surface, but nevertheless force response, turning them into intimate scenes of awareness and absurdity, showing us that our noses can make weird puns too, and it’s okay to laugh.

Whitney Claflin is an artist and writer living and working in New York. She has exhibited and performed at Real Fine Arts, The Green Gallery, Artists Space Books & Talks, and the Venice Beach Boardwalk. In 2015 she completed a book of poetry, titled Police Heads. She is currently working on some new poetry and music.