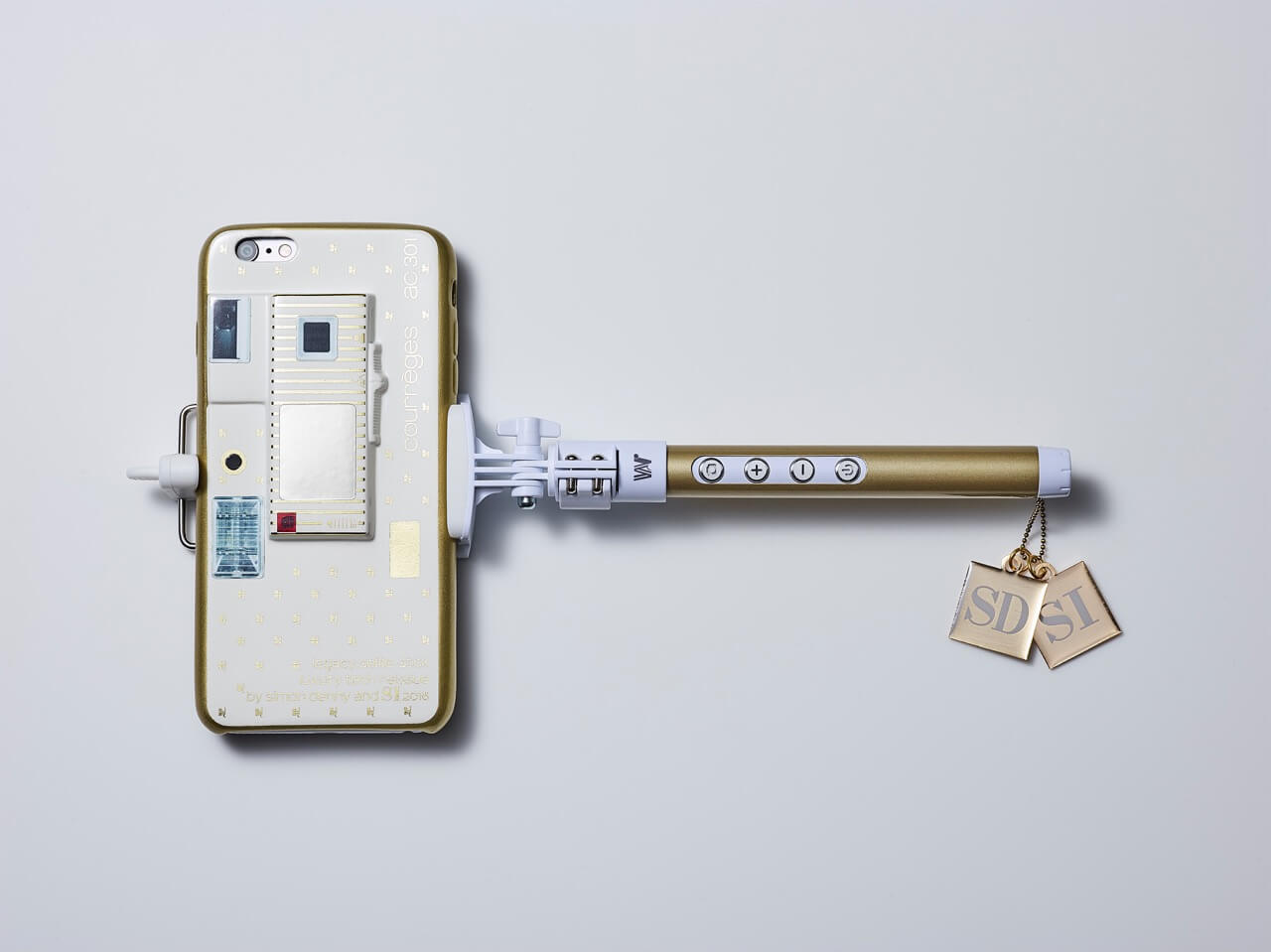 Artist Simon Denny’s face is spinning around and around on the screen of a gold iPhone 6 Plus, as I swivel the clamp on the SIxSD Legacy Selfie Stick Luxury Tech Reissue into upright position.

The selfie stick is both a totally functional tool for self-portraiture and also one of 60 limited-edition artworks that Denny has created in collaboration with the Swiss Institute in New York. I’m using it to give Denny a FaceTime tour of the gallery’s brand-new space in TriBeCa, while he sits in his studio in Berlin. I feel very 2016. But also very Wall Street-era yuppie, because the stick and its accompanying iPhone case — together, a remodel of the 1984 Courrèges x Minolta “deluxe” ac301 camera — are covered in little gold logos.

The original Courrèges x Minolta “deluxe” ac301 was a digital camera co-designed by forward-thinking French fashion designer André Courrèges and Japanese camera manufacturer Minolta. It came decorated with soft pink waves or Courrèges’ futuristic “AC” insignias. On the front, a small mirror allowed you to check on your perm before snapping a picture using a telescopic extension stick. One magazine review called it “the photographic equivalent of a French poodle.”

Denny’s 2016 reinterpretation of the ac301 replaces the digital camera component with a trompe l’oeil iPhone case that mimics the original’s cream finish and gilt flourishes. Denny’s version is also visibly handmade. The little mirror on the front is now a small rectangle of reflective paper that makes you look like a funhouse freak, and the flash bulb is just a photo decal. It’s a tongue-in-cheek testament to shanzhai, the vibrant knock-off culture of China’s tech capital, Shenzhen, and the complex economics of selfies.

Suspended at arm’s length, Simon spoke to i-D about the origins of the selfie stick.

First question: how did you come up with this idea?
In my practice, I look at technology and the politics of technology. Simon [Castets] from the Swiss Institute had this idea that selfie sticks were an interesting thing, and so I started looking into early models. The Minolta and Courrèges camera was the first time a selfie stick was specifically made and included in a product.

When we were digging around the original product, it became clear that it was marketed to women. There was this idea that gadgetry was probably the domain of men. And the fashion and lifestyle crossover was something that helped open up the untapped female market for tech. It’s interesting that this kind of cross-gender marketing led to the technology for the selfie stick.

I’m also very interested in the expansion of the tech world. I’m preparing a show in Shenzhen at the moment. Most of the world’s tech hardware is made there. It has this huge factory system which has many negatives — famously including awful working conditions — but also positives. Somehow in the way Shenzhen has evolved, there’s leakage and sharing of intellectual property, which creates a whole lot of fake products. It’s called shanzhai. There are vast fake tech markets, selling “iPhones” in any shape, size, colour you like. That ecosystem has also made it a very attractive place for hardware accelerators and startups. So I thought, wouldn’t it be cool to make a knockoff version of this older product as a contemporary selfie stick?

Where did you produce it?
Ironically, in LA. With a very handcraft-y guy who does a lot of sculpture. I wanted to avoid the labor issues, and I like the idea that it’s a hand-crafted knockoff; it’s a nice contrast to the idea of mass-production. And the real irony of this thing is that it’s the ultimate luxury because it’s an artist’s edition made by an art gallery.

How many of the original products were sold?
They did not sell very well…

They were too ahead of their time!
A very long way before their time. And it was more of a side project for Courrèges. Simon reached out to Courrèges and they gave us an amazing file on the product, which helped us understand more about the marketing. Something I think about a lot is: why is luxury one of the only growth markets in the world right now? It’s very likely because of the divergence in income that’s happening, and widening inequality. I think linking that political shift to the rise of selfies is an interesting thing to encapsulate in an object.

When the modern selfie stick first appeared, in the early 2000s, it was mocked; one was included in a book of “101 Useless Japanese Inventions.” Which products in the markets in Shenzhen now do you think will seep into global culture?
VR helmets are there in force. There are also a lot of knock-off GoPros. And the latest smartphones of course. I think tracking the world of knockoffs gives you an advanced view into where tech hardware’s at.

I was so surprised to find out a selfie stick existed in 1984. They’ve become so symbolic of our generation.
At first, it puzzled me too. But then I was like,”Of course.” The 80s was this time when luxury was first on the rise. The markets were becoming de-regulated, which was a precursor to the growth of the luxury world and the concentration of wealth at the top which we’ve had recently. So I thought, actually, it makes sense that this existed in 1984, because that time really resonates with now. That the seeds of this type of image-making were sown then made political sense.

The Courrèges stick was purposefully marketed to women. But today’s selfie stick feels much more gender-neutral. Is that something you thought about?
If this early selfie stick was about making gadgets more accessible to women (or if that’s the way it was marketed), it also led the way for the iPhone to be more of a lifestyle device than something more utilitarian. You can trace that line to the gendered outcome of phones. Introducing the gadget market to the female market may have led to a more holistic and useful product. I think that’s an interesting narrative to consider. Maybe without that marketing to women, we wouldn’t have a great iPhone, we’d all still be on Blackberrys.