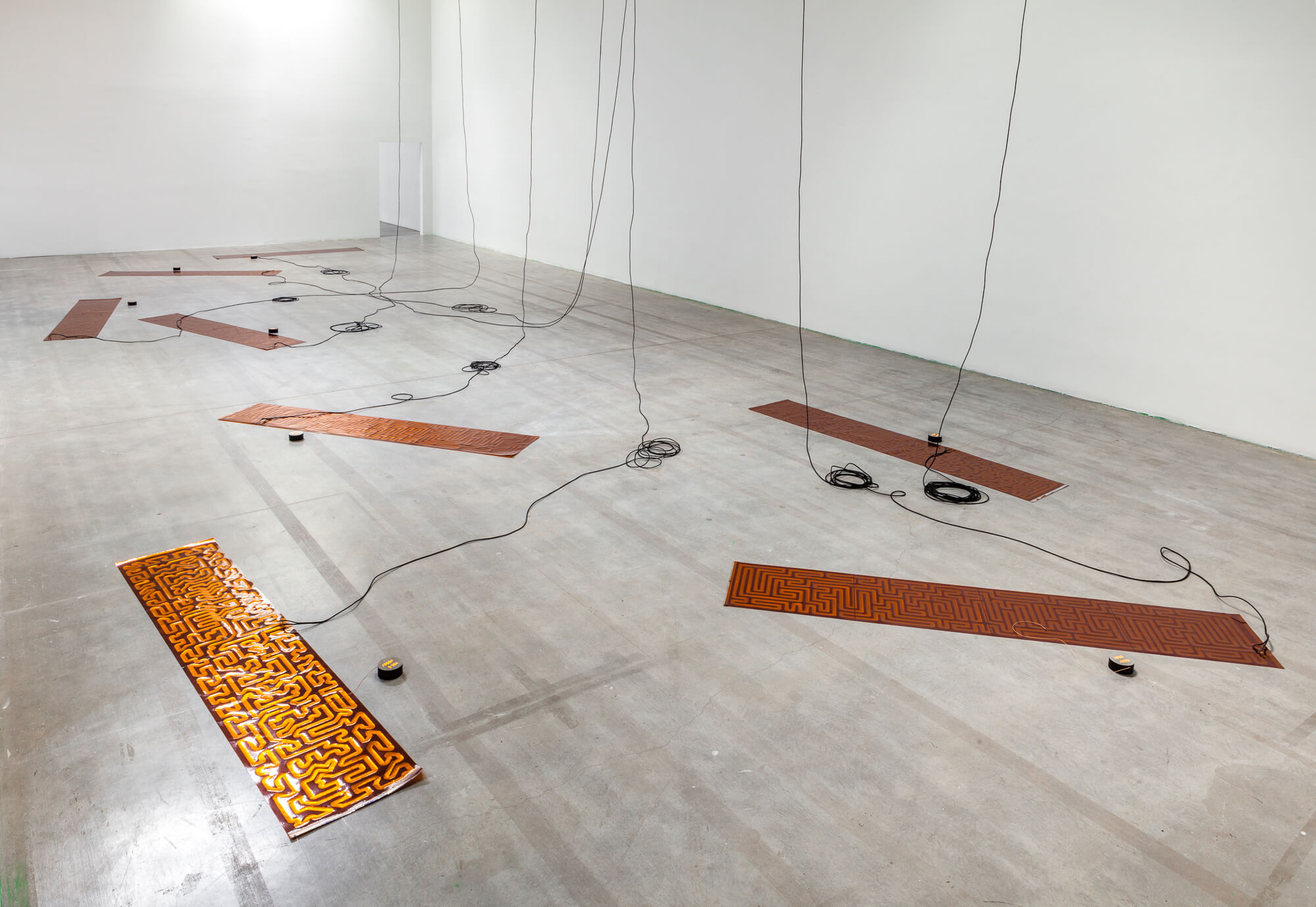 A few years ago Sam Lewitt discovered the address for a high-speed data-trading facility in Mahwah, New Jersey. Having found what he called an “open secret,” Lewitt went to the facility and brought his camera with him. Euronext, a company that supplies Wall Street companies with market data, owned the building, and all he saw there were its servers and security guards, who detained him and wiped his video footage. According to Lewitt, the guards didn’t want him to have any information about points of access, security cameras, and, most importantly, the building’s cooling system.

“If that were to die, the whole thing would go offline,” Lewitt told me in a recent interview at his Williamsburg studio. “I realized, at that point, that there was something in my camera, this flexible circuit structure, which already joined my camera’s technology to the servers themselves, which all have the same material in them.” In other words, Lewitt had been a part of a system before he even knew it.

And that’s why, since 2013, Lewitt has been using those circuit structures to interrupt that system. Now, in an installation that will go on view this week at the Swiss Institute in New York, Lewitt will cause the circuit’s thin sheets of copper and plastic to overheat, turning the gallery into a hotbox. Called Less Light Warm Words, the work involves rerouting the energy from the gallery’s lighting system into these circuits, which are normally designed to keep objects like phones, cameras, and laptops cool. Removed from their source, enlarged, and plugged into the Swiss Institute’s electrical system, these circuits now create dry warmth similar to the kind that comes out of radiators.

“The project sort of emerges from wanting to exhaust the material—and, for me, the discursive—possibilities of structures that are very public,” Lewitt said. “They circulate through the world in an extremely ubiquitous way, but [they] remain hidden or concealed in order to function properly.”

Hearing Lewitt talk about his work makes him sound like an artist from another era—an underrated Conceptualist, or maybe a Hans Haacke acolyte. Here’s one representative sound byte he gave me: “It really is registering the flows of the energy and power as they move through that site, and so the work just provisionally localizes those flows and thickens them into this set of homeostatic heating circuits.” In reality, Lewitt is not yet 40. He has a slender frame and matches black T-shirts and skinny jeans with white Nike Air Force 1s.

Lewitt’s works examines how information is exchanged through various capitalist structures, from printmaking to currency itself. References to Hegel sometimes appear, and inspirations from Minimalism and ’70s institutional critique artists like Michael Asher are obvious. But more so than in the past Less Light Warm Words physically evokes the gallery space as a system—“an ecological object,” as Lewitt called it.

Less Light Warm Words is a summer show that may cause you to leave feeling dehydrated—temperatures inside the installation can shoot well over 100 degrees. When I visited, it was bright and sunny outside—a nice, hot, 85-degree June day. Inside the Swiss Institute’s cavernous space, no lights were on, but it was even hotter than it was outside. (When the project debuted at San Francisco’s CCA Wattis Institute for Contemporary Art in September, it was called More Heat Than Light. Lewitt has tweaked and retitled this final rendition of the work, perhaps in reference to how little artificial light there is in the Swiss Institute’s space.)

Most of the installation is a series of circuits with sensors attached to them, strewn on the floor like dropped documents. Vine-like black wires slump down from the gallery’s ceiling, but for the most part there’s not much to see. The effect viewers have on the space is visible on the sensors, however—movements through the installation create slight fluctuations in temperature. “The numbers really dance, as it were,” Lewitt told me. “They go up and down, and register your presence in the space as a sort of environmental disturbance… You never know what you’re going to get.”

That sense of spontaneity is very much on purpose, Lewitt explained. “[The circuits’] function in the world is to be sealed into vacuum enclosures, so that they hit a steady state,” the artist said. “In other words, [they’re] meant for thermal regulation, not making stuff super, super hot…But, when I open them up to a container that’s too big, they struggle to hit that steady state.”

On the copper strips included in Less Light Warm Words are etched geometric patterns that resemble Frank Stella abstractions or, because of their brownish tint, Art Deco interiors. It’s hard to tell at first glance, but these actually depict phrases found in the manufacturer information that comes with cameras, laptops, and phones. Remade using an algorithm, Lewitt translated phrases like BELONG ANYWHERE and CUSTOM PROFILING into images. He called them “hieroglyphics,” and added, “The challenge is, how do you do that in such a way that you don’t end up producing a second work or material—in other words, without writing something on a piece of paper and putting it on the wall?”

One way he overcame that problem was by staging an iteration of the project in an AirBnB in New York earlier this year. “This [idea] came from a very simple activity of just reading through all the manufacturing material,” he said, “and seeing that the kinds of concepts and language that are used to describe this kind of technical object coincide very closely with, say, the kind of language that’s used in an AirBnB press statement.”

And so Lewitt found the perfect location: a former light industry space that had become a creative loft, which was sometimes posted as an AirBnB for extra money. Because the space had been transformed so many times, it “echoed very nicely the way this works on a chain of conversions—you could even say ‘translations,’ ” Lewitt said.

“The interest for me there is all these little gaps that emerge in perception, in the causality of what you see and know about the work,” he added. And what was it like to effectively short circuit an AirBnB? “It was a little clandestine, but it worked.”