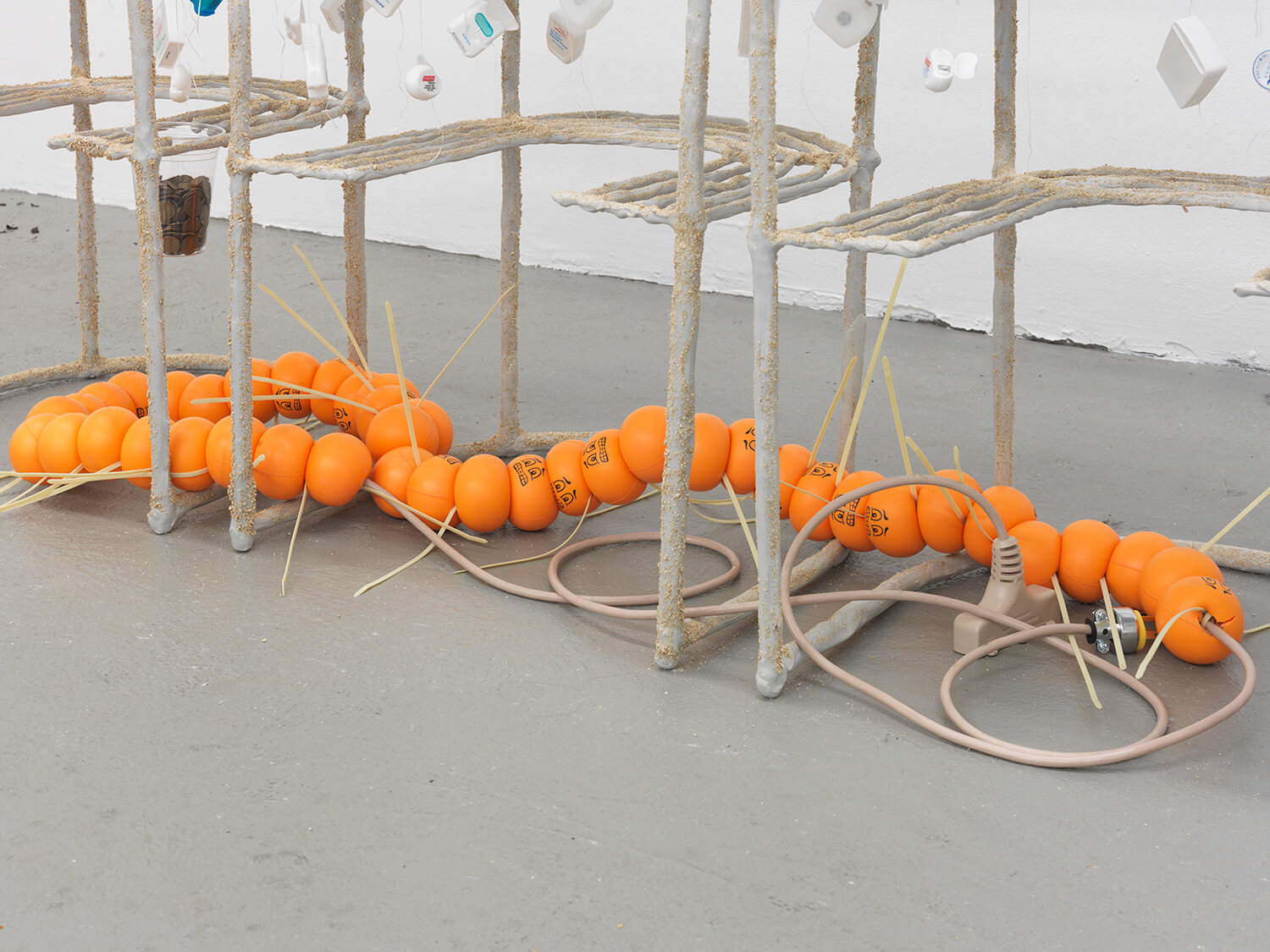 Two similes for Nancy Lupo’s ‘Parent and Parroting’ are jostling in my head: a drastically upscaled potpourri, and an unusually expressive midden. The show includes scattered orange peels and rose petals, and so many other things – rubber household implements, coins and chewing gum – that the exhibition’s materials list is longer than its press release. These trinkets are alternately piled atop, woven into and hung from 28 wire storage units, like those you see in food pantries, but covered in hobby clay and kitty litter. Like a pagan altar, faced by pew-like rows of cheap folding chairs, Lupo’s installation is laden with objects that obediently serve our bodies’ stranger needs. Reverent yet absurd, it eschews the sober self-regard of New Age spiritualism.

All this took place in the basement of New York’s Swiss Institute. Lupo has installed her gritty, putty-sculpted food racks in a U-shaped enclosure. Like exoskeletons, these both structure the installation and constitute its most visible element. Piled atop their various shelves are real oranges as well as Terry’s Chocolate Oranges, cracked open so their decadent brown wedges spill over red and green foil packaging. Nearby on the floor, fluorescent orange stress balls with cartoon faces are strung over an unplugged extension cord, like anti-vampire garlic. Rhyming and repetition are used to magnetic affect here, and not only visually; when I visited the gallery, the absence of electricity pulsing through this cord was matched by a conspicuous absence of human bodies on the cheap folding chairs Lupo has used to hem in her scene, and give the installation the feel of a theatre or chapel.

Without subtlety, the exhibition’s press release instructed viewers to see this U-shaped corral as a human jaw. I didn’t. But I did want to bury my teeth in those chocolate orange slices. This is important because Lupo plays with the various affective powers of objects, which work not only in our eyes but also our stomachs and salivary glands. In this vein, several boxes of dental floss hung from beneath one of the racks, like abstracted spiders, their waxy strings forming woven screens reminiscent of rattan chairs or children’s art projects. Nearly every one of the floss cases was a different brand, showing the attention Lupo pays to the aesthetic grain of banal objects.

Our willingness to believe in the transcendent power of sculpture has always been aided by language, architecture and institutional power. By arranging her work like an altar, Lupo acknowledges the power of staging, and uses it to envelop the contents of kitchen cupboards, bathrooms, pantries, and even our own mouths, with a transportive aura. This places her squarely within a couple of avant-garde traditions: the quasi-ritualistic sculpture emblematized by Paul Thek, for example, and the quintessential collapsing of art and life in Claes Olderburg’s early transformations of grocery store items.

What should we make of the combination of visual pleasure and physical sustenance that forms this absurdist material theatre? Rose petals, orange peels and cinnamon cloves all suggest comfortable indulgence   – but piled and scattered, they also indicate a vanitas for our own troubled times. A cup of copper pennies hanging beneath one shelf furthers this foreboding undertone – somewhat benign but also transmitting a slow-burning anxiety. Not to mention the simulated bones and turkey legs slipped over parts of the wire framework, or the lazy cantaloupe cradled by plastic mesh. This question is suspended by Lupo’s arcane poetic associations, which edge close to fetishistic babble, and are all the more compelling for risking that fate.