A musician, composer and writer as well as a painter, Mr. Schärer was an autodidact, but he wasn’t crazy. The son of a physician, he quit school after World War II, gravitated to Paris and painted under the influence of Jean Dubuffet and Art Brut. Back in Switzerland in 1956, he married, eventually had four sons, and became a convivial and influential participant in the Swiss art world. Lately, his work has attracted more widespread attention. Cindy Sherman included some of his Madonnas in a section of the 2013 Venice Biennale that she organized. The present exhibition is an abridged version of one organized by the Aargauer Kunsthaus in Aarau, Switzerland. 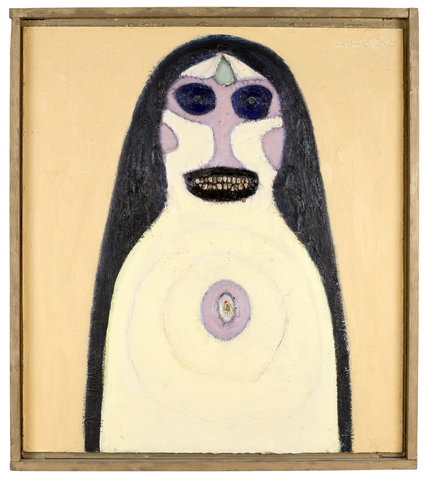 Rendered in heavily built-up layers of paint, the Madonnas have bodies like bottles with rotund heads for stoppers and long hair falling like hooded capes. Their faces are like masks with staring eyes and smiling or gaping mouths studded with little pebbles resembling real teeth. Seashells, hair, nails, buttons and other common objects also can be found embedded in the paint of different pieces. Earlier Madonnas have the figures inscribed with blunt implements into the thick paint surfaces. Later they acquire confectionery colors in stripes and spiral patterns, giving them a Pop-psychedelic spirit. All are spooky and funny. 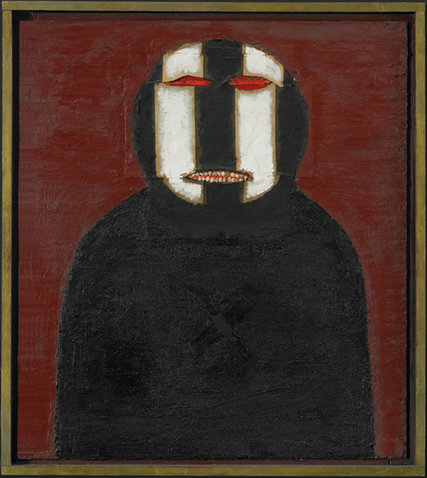 Mr. Schärer’s watercolors revolve around at least one female figure — sometimes more than a dozen — a statuesque woman with long dark hair, big eyes and a red-lipped, toothy grin. The imagery is as ridiculous as it is unabashedly pornographic. One piece depicts a quintet of naked Amazons riding a bobsled down an alpine slope. Weapons of war appear in others. In almost all of these images the women are in charge. Male characters usually are the size of children and often have prosthetic noses and other kinds of masks strapped to their faces.

Mr. Schärer’s images convey 1960s-type, countercultural sentiments not only in their defiance of puritanical censorship but in their implicit call for a new, sybaritic world order in which sex would be not shameful but a sacrament. In a seashore scene, a siren has climbed a ladder leaning against a tower and is waving her underclothes at a sailboat out on the water manned by an archaic warrior holding a spear and a shield. She’s apparently urging him to make love, not war.

But it’s the spectacle of the artist freely and openly working out in paint his relationship with female Otherness that gives his art its captivating intrigue. Can pornography be raised to fine art? Mr. Schärer is just one of many artists from myriad cultural traditions who have proved that it can.