BASEL, Switzerland—The sheer mass of artworks at Art Basel can numb the senses; one antidote to this art overdose is the handful of offbeat projects to be found in and around the fair. Take the so-called “biting chamber” that New York-based artist Michael Portnoy created for Swiss Institute. The writing on its entrance wall read “Wandbiss: A Fine Biting Experience” and was punctuated by a half-eaten chain of sausages; strains of classical music with a disco beat (from the erstwhile hit album Hooked on Classics) lent a carnival pacing to the unseen action behind it. As I arrived, the hostess at the desk penciled me into a spot that had just opened in the otherwise booked schedule. Only a few patrons were allowed in at a time.

My companions for the eight-course mini-meal that followed were Sabine Lang and Daniel Baumann, an artist duo from Bern who also involve viewers in their own playful installations. Ushered inside and forbidden to use our hands, we were fed our first course through small holes in the white Plexiglas walls and ceiling. The flaps on the backside of the slots clanged open and shut in time with the music, and our hors d’oeuvres were snatched back before we could catch them. “They are playing a game with us,” Baumann remarked.

We were at the mercy of our faceless feeders, and did not have the luxury of identifying ingredients before lunging or leaping to grasp them in our mouths. Luckily, Basel chef Christina Ramseier had crafted each gourmet morsel and the edible base on which it was proffered with an inventive eye toward flavor as well as conveyance, from a squiggle of avocado crème on an elongated potato chip and a plum tomato filled with cold sorrel soup and served between fried-spaghetti tongs, to a flaky dough basket of onion-and-gorgonzola quiche threaded on elastic mung noodles and dangled from above.

“It’s really nice to trust and then get fed such good food,” Lang appraised afterward. “I really enjoy if an art piece, especially a performance piece like this, treats the viewer nicely.”According to Portnoy, one source of inspiration for his “dysfunction sculpture” is Whack-a-Mole, the well-known amusement park diversion that challenges players to smack down bobbing plastic moles with a mallet before they disappear back into the range. By “providing new constraints for human behavior,” Portnoy believes he prods participants to “think about expanding their capacity for interaction.”Said Baumann of the work, “It can be a game they were playing, but in a nice way. Every time it came into our mouths, we were the winners.” 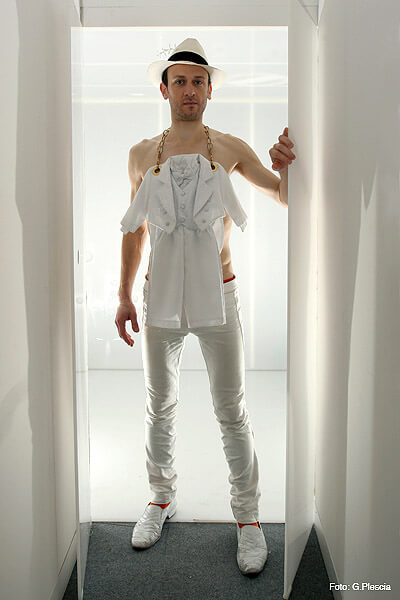