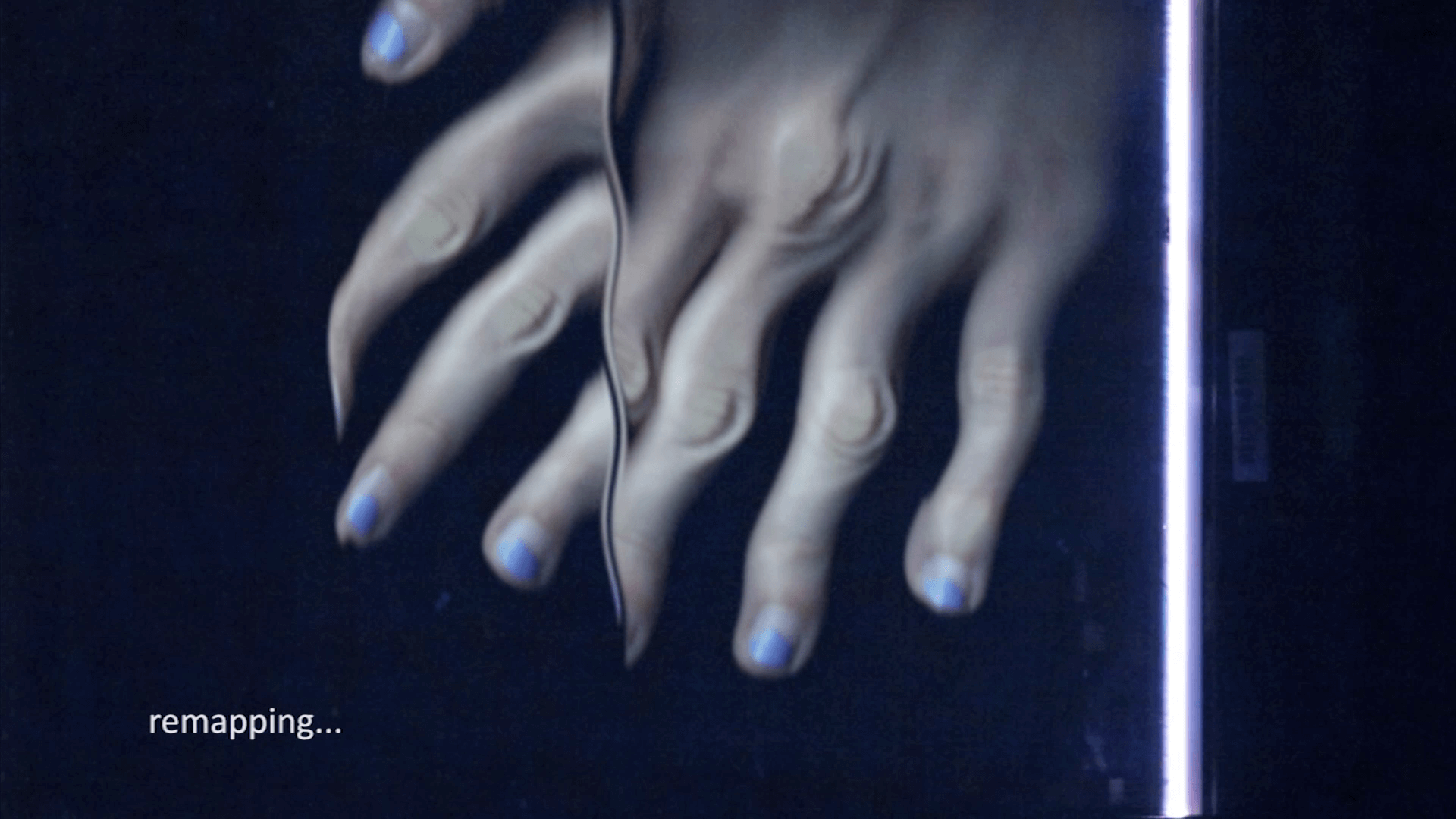 Cynthia and Celinde share a body. The have two heads, three legs, a slightly widened torso, and sixteen amphibian-like toes. Wearing a midriff-exposing tank top and short shorts, the two are rendered simply, as an anime-inspired sketch, and barely animated (they blink). But, though this is how they appear in virocrypsis (all works 2015), the centerpiece of Andrea Crespo’s exhibition at Swiss Institute, we soon learn that the artist’s conjoined protagonists weren’t born this way – or born at all. At the start of the looping video, the vertical bar of a scan head travels across the screen slowly, back and forth with its cold light, as we see a fragmented hand wearing grown-out periwinkle nail polish, then a shot of a robotic lab dropper and petri dish. Next, we’re peering through a cracked window, or maybe into a damaged monitor. Gradually, Cynthia and Celinde appear, a white line drawing against black, and a narrative emerges: “At last…” begins one of them, “…we have a body.” The other continues, “We’ve been waiting for a very long time.”

Their communication is silent, telepathic; white captions pop up on either side of the frame to denote which of the two is speaking. Bluntly expository, plot-establishing dialogue soon spins off into a kind of philosophical poetry, short lines of text brightening a backdrop of flickering black-and-white footage and a sound track of grainy synths. To powerful effect, Crespo repurposes the terminology of psychiatry, cybernetics, hacking, data management, microbiology, and romance to craft Cynthia and Celinde’s clever dialogue. In detailing the technical and psychic process of entrapping, inhabiting, and mutating their host, one says, “We began zeroing in during its adolescent years – .” The other picks up the story line, “ – we zeroed out our nervous system.” Here, “its” is the same as “ours.” Their possession of a body, initially liberating, eventually tragically subjects Cynthia and Celinde, who are now outwardly perceived as a single entity, to a series of diagnoses: obsessive-compulsive, bipolar, autistic.

This semi-abstract, politically melancholic love story was shown as a floor-to-ceiling projection in Swiss Institute’s basement gallery. Just two other works, digital prints on sateen, were on view, stationed at the darkened room’s entry. For these, the fabric was stretched over curved wire rods that held the pieces away from the wall, making them into screens, literally, while they resembled the other kind of screen, too, their bedsheet sheen like the luminous surface of a computer display. In attracting…, Cynthia and Celinde are shown with two legs instead of three. Strands of hair connect their scalps, and they cross their arms to sweetly cradle the opposite face. The other print, patient(s) history, lists their traits and stats beside a friendly portrait. They are twenty-two years old and six feet tall; their sex is “male (inter-gendered)”; and among the “special abilities” indexed are “echolalic lullaby” and “memory encryption.”

The blank cuteness – or cyborgian innocence – of these tender and ambiguously erotic depictions is characteristic of the subcultural fan art they reference. Drawing from the figurative vernacular of online communities such as DeviantArt, where users share images of the detourned or invented fantasy characters they identify with or desire, Crespo invokes a field of highly imaginative posthuman discourse – a theoretical, speculative, and self-referential world driven by the intense emotional and sexual investments of its far-flung participants. virocrypsis shares that obsessive, generative energy, and, with a palpable sense of longing, explores all available – which is to say, popularly unavailable – technologies of the self. (Or of the selves.) Perhaps this moving work’s most impressive achievement is its use of a superspecialized, sometimes incomprehensible language to make us care about the flat and inscrutable Cynthia and Celinde, as well as (maybe especially) their elided living host.   – Johanna Fatemen