Swiss Institute is proud to open an exhibition in conjunction with the U.S. launch of Slavs and Tatars book Molla Nasreddin: the magazine that would’ve, could’ve, should’ve, a legendary Azeri political satire and perhaps the most important Muslim periodical of the 20th century.

Featuring illustrations reminiscent of a Daumier of the Caucasus, Molla Nasreddin was read from Morocco to Iran; it addressed issues–gender equality, Islam’s integration of Modernity, education, Western meddling–as relevant and urgent today for a global audience, as when it was first published, in the Caucasus, a century ago. In the SI Reading Room, Slavs and Tatars will present a select archive of printed matter on the rambunctious, rowdy case study of complexity otherwise known as the Caucasus, sandwiched between the Bolshevism of Russia, revolutionary Islam of Iran and a declining Ottoman Empire.

Slavs and Tatars is a faction of polemics and intimacies devoted to an area east of the former Berlin Wall and west of the Great Wall of China known as Eurasia. The collective’s work spans several media, disciplines, and a broad spectrum of cultural registers (high and low) focusing on an oft-forgotten sphere of influence between Slavs, Caucasians and Central Asians. 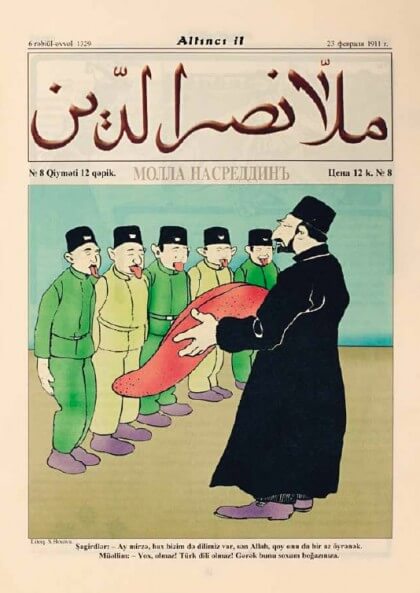