At Swiss Institute’s invitation, Pamela Rosenkranz (born 1979, lives in Zurich and Amsterdam) and Nikolas Gambaroff (born 1979, lives in New York) present their work together for the first time. Established in dialogue, the exhibition contains two interwoven shows with distinctive titles: This Is Not My Color (Rosenkranz) and The Seven Habits of Highly Effective People (Gambaroff).

While none of the works in the exhibition actually present the human figure, their size, proportion, and posture reflect a common concern for the bodily. Both artists also share an interest in the exploitation of painting but refuse to consider themselves painters. The works reflect a strategy that borrows from and critiques consumer industry’s marketing of an idealized self—one which can be attained through the purchase of commodities, from self-help books to mineral water. The core of the exhibition is the idea that the made-for-purchase person is an illusory construct, one that can be unpacked through scientific and philosophical analyses.

This Is Not My Color
Recent scientific experiments have demonstrated that our perception of color is a result of evolution. Pamela Rosenkranz investigates how such ideas undermine artistic production as such. In the series Firm Beings, plastic water bottles of Evian are filled with a product normally used to apply artificial patches on actors’ skin. The tones selected by the artist represent the flesh colors of predominant target groups for Evian. The combination of product and idea, surface and volume, skin and water, culminate in an abstract portrait of the human body in a bottle.

Anthropomorphic proportions are re-iterated in all rectangular work in the show, where the size of blankets—typically a layer to cover the human body—establishes a standard format. The bright background colors of the framed series The Most Important Body of Water is Yours are borrowed from Evian and translated into the gay palette of spandex, a fiber used for sports clothing where stretch is desired. The four-part work openly plays with stereotyped Abstract Expressionism. But Rosenkranz has applied color through intermediary foil using a monotype printing process, creating distance between her and the surface of the work, thus eliminating a subjective expression.

In the photo prints Because they tried to bore holes in my greatest and most beautiful work, the artist investigates Yves Klein’s color blue, YKB, an interesting example of color used as a distinctive artistic brand. She discovered a reproduction of a Klein painting online and downloaded it from three different sources, emphasizing minimal differences. Eventually she mounted the prints by hand, leaving a pattern of physical impact as an additional impression.

Over my Brainbow (shown in the sublevel space) is a dual projection of flashing colors combined with an animated image. Brainbow is a scientific term used to describe the process by which individual neurons in the brain can be distinguished from neighboring neurons using fluorescent proteins. Rosenkranz’ monochromatic colors are blank screens filled with references. In their midst, a film animation offers an almost intimate encounter with Michael Jackson. Rosenkranz has added a pair of gently blinking female eyes to the idol’s face, creating a vulnerable portrait au naturel of a human being who dramatically changed his skin color.

The Seven Habits of Highly Effective People
Nikolas Gambaroff (b. 1979, lives in New York) presents an updated version of the work, The Seven Habits of Highly Effective People, initially shown at Bergen Kunsthall in 2010. The title is borrowed from a highly successful self-help book. Each work is named after a chapter or “habit.” In this iteration, some of the sculptures, such as Be Proactive (2011) or Sharpen the Saw (2011), are body-sized lampshades, which are placeholders for pieces that have been sold. Comprised of linen stretched over metal frames, the lampshades reference painting on a structural level and relate to the human body in their posture and size.

Gambaroff concerns himself with questions of authorship, display, distribution, and reception. Though his painterly practice unfolds from a conceptual core, his multiple-access approach offers a wide range of combinations. In Synergize(2010), pieces of newspaper are bound together by italicized paint strokes, an index of the artist that is both personal and anonymous. By tearing off the top layer, he creates an inverted palimpsest that overwrites the broadsheet’s layout, transforming it into an abstract composition. This process of creation is precisely organized but guided by gesture. The installation of canvases as mise-en-scène destabilizes painterly praxis. Shown as assemblage, the artist combines them with domestic objects, thus positioning painting as a shield (Almost a palindrome, 2010), a shelf (Begin with the End in Mind, 2010), or a tabletop (Think-Win-Win, 2010) in off-wall installations. To even out the sloping floor of the gallery, self-help books figure as wedges, preventing the assemblages from falling apart. As with the actual canvases, Gambaroff’s motifs and gestures are displaced and travel between different support structures. This fluency of references extends to mass-produced mugs marked with the trademark of the canvases; Gambaroff’s transfer of signs and supports is made multi-directional. 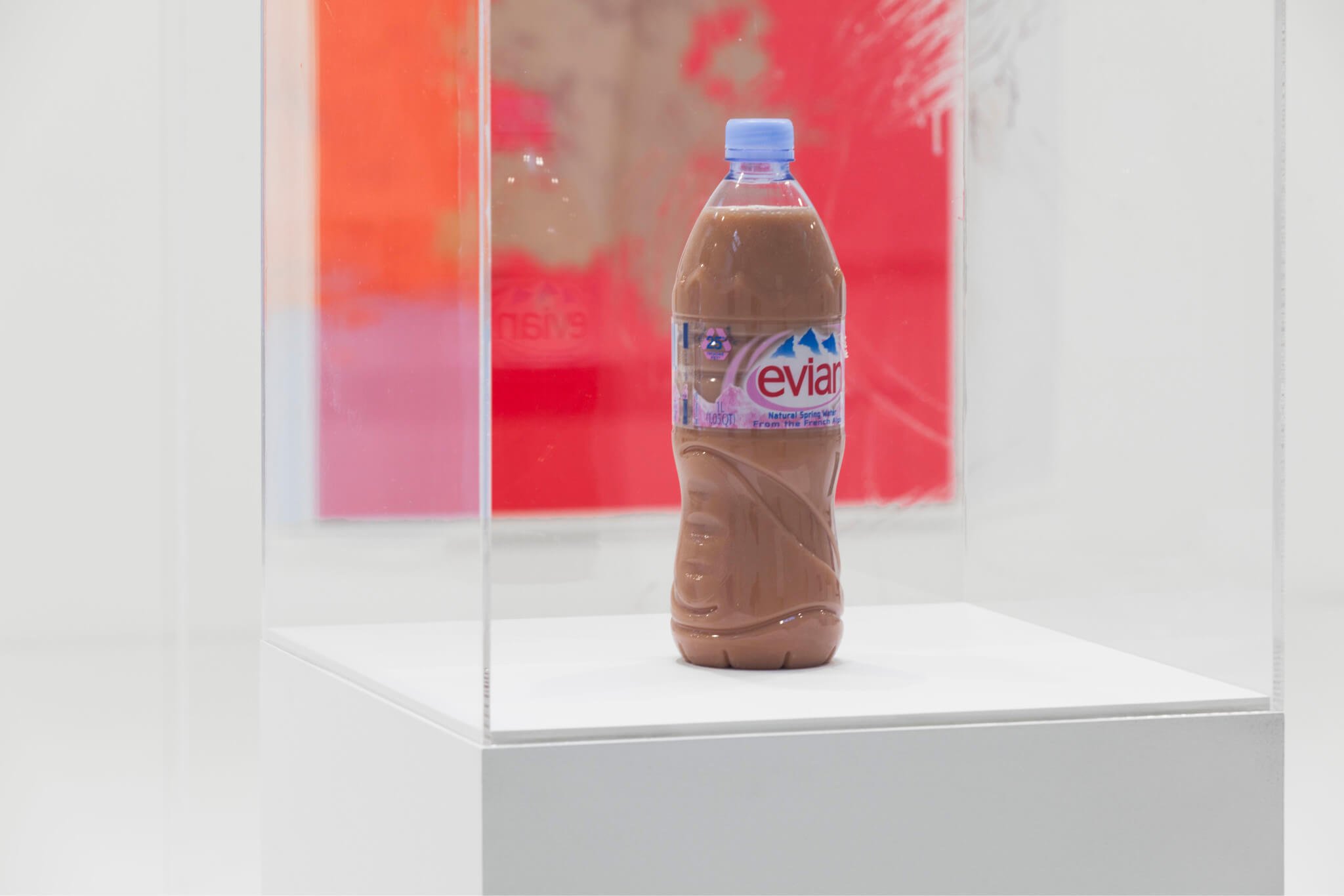 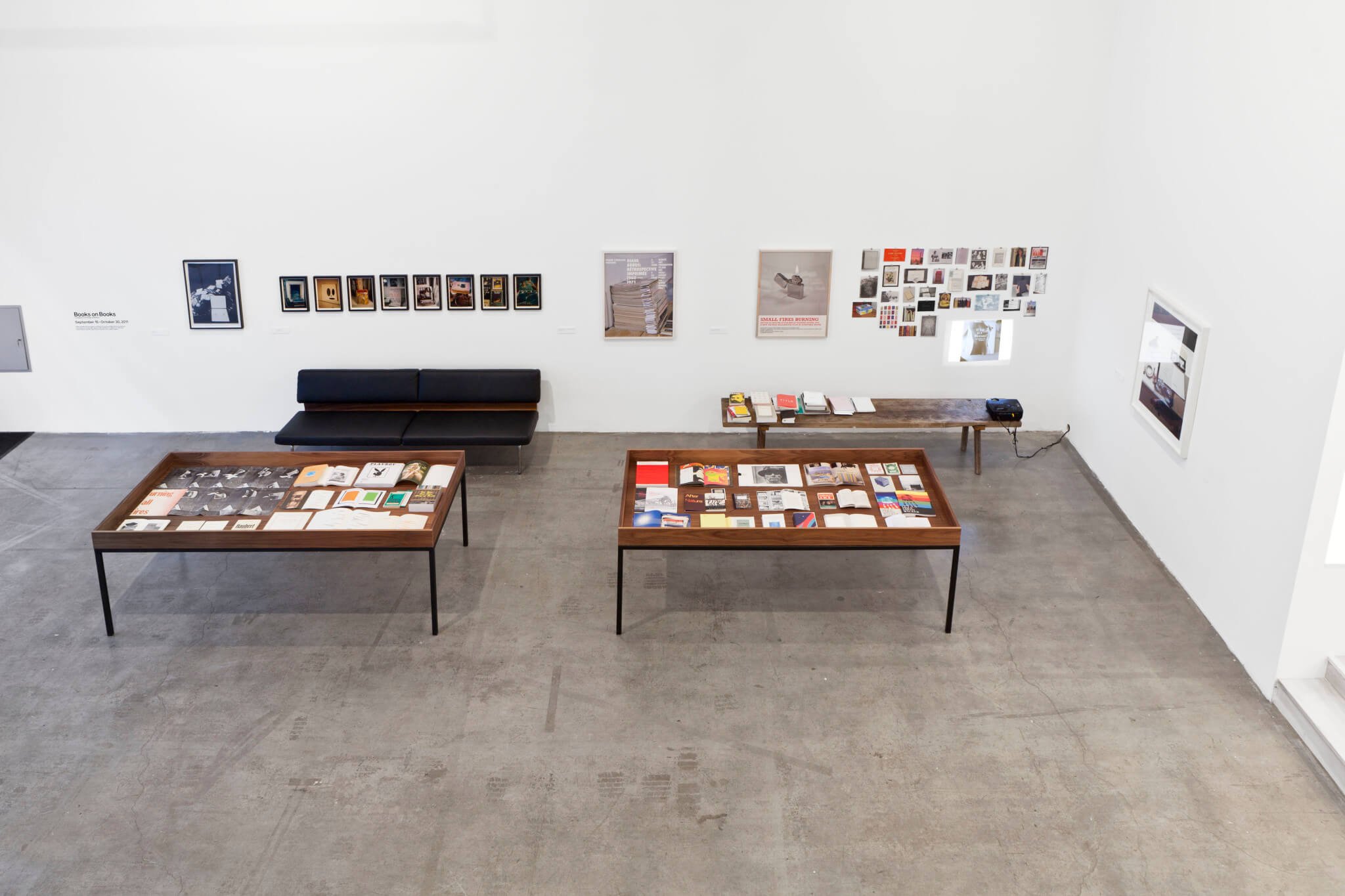 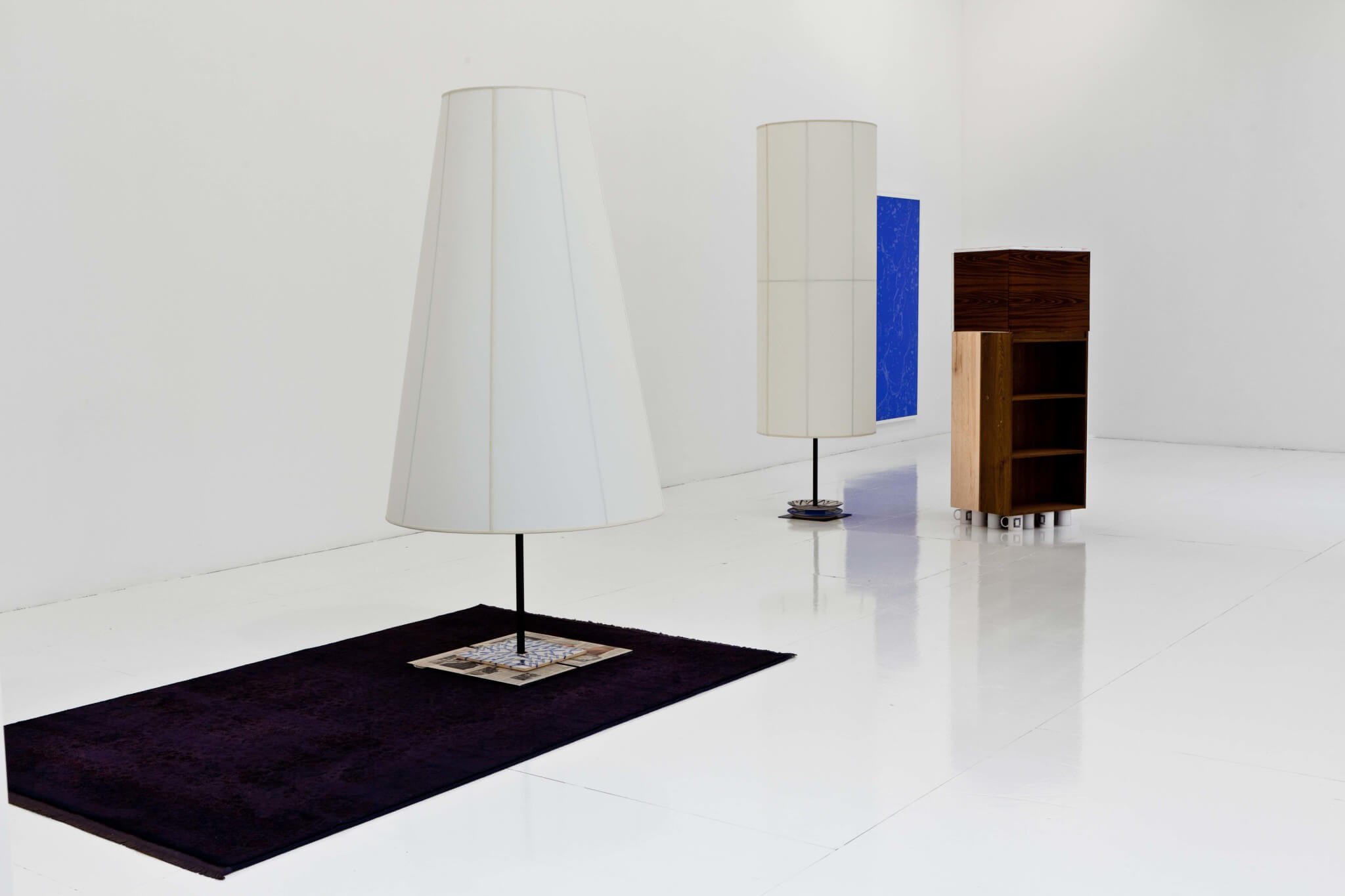 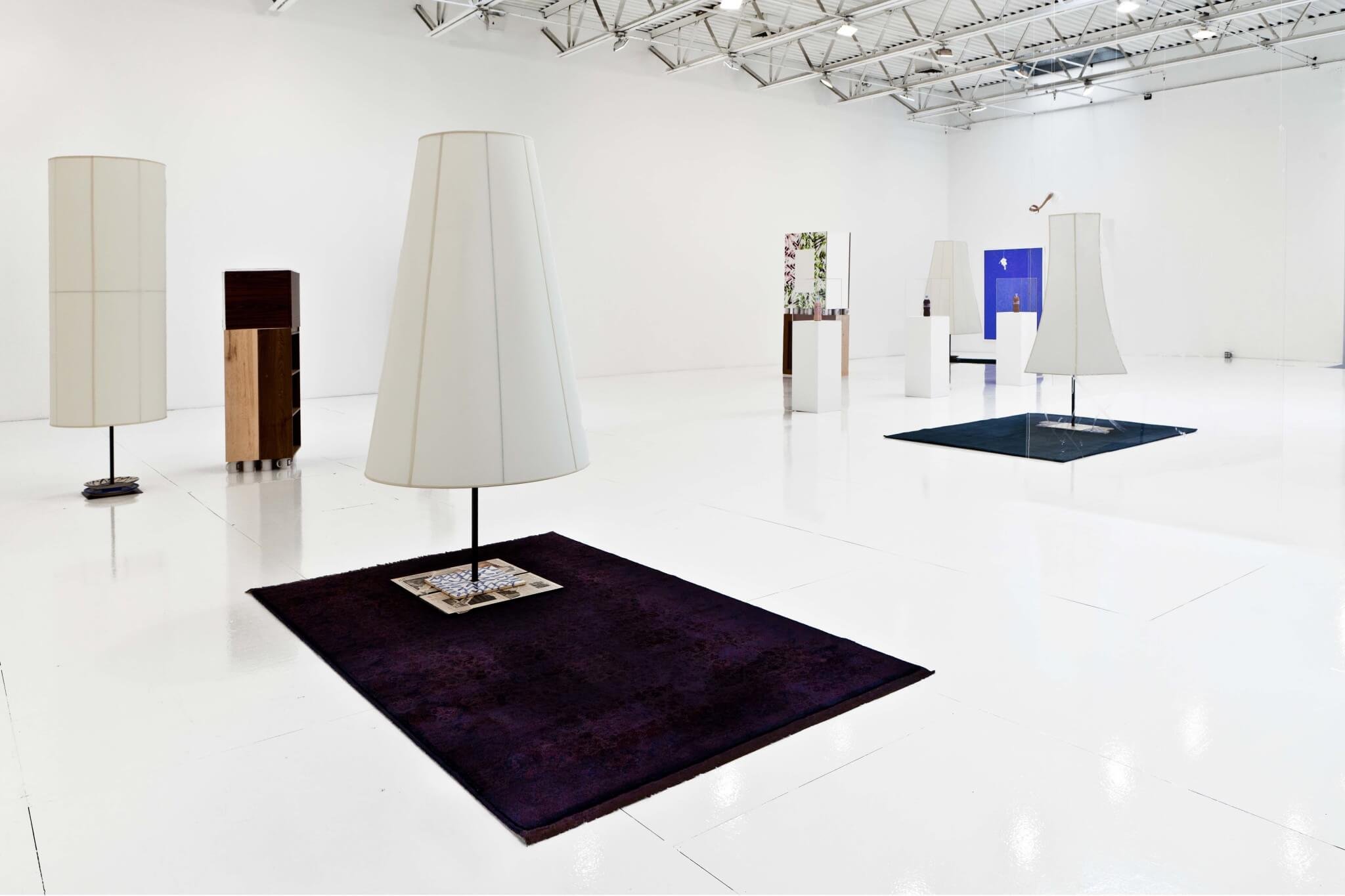 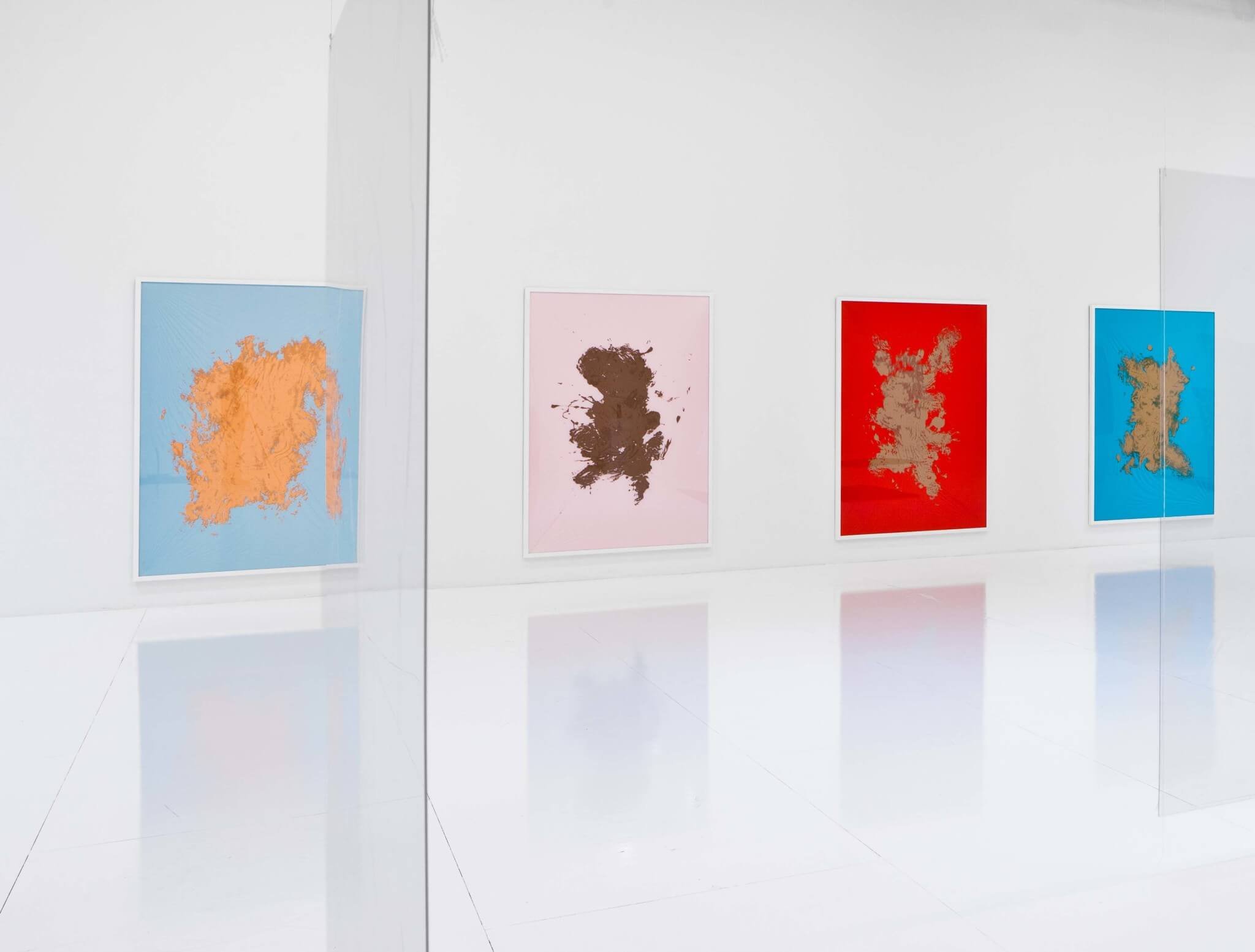