US Premiere | Malcolm McLaren | Paris, Capital of The Xxist Century 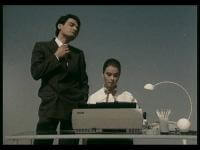 Paris, Capital of the 21st century, is the latest artistic project by Malcolm McLaren. The film is a pastiche of commercials that are related to the French capital in one way or another. An advertising clip directed by Jean-Luc Godard is followed by a silent movie from the 20s for the legendary French cigarette brand GITANES. Through subtle montage and sequencing, McLaren creates a collage of movements and sounds. The result is a terrific symphony that catapults Walter Benjamin’s Capital of the 19th century“ into
the future.