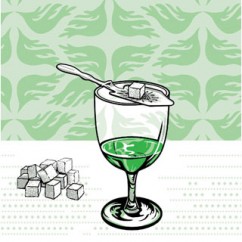 The Green Fairy is back!

The famous liquor from Switzerland hasn’t been sold legally in the United States since 1912. Absinthe’s rich history and mystique have started in the 18th century in the Val de Travers. And although absinthe won’t actually make you see little green fairies, it is one of this year’s most-sought-after spirits.

Try a glass of absinthe and see the shows by Jordan Wolfson and Greg Parma Smith at the Swiss Institute under the influence of the herbal liquor.

In conjunction with Collect SOHO and Soho Night.